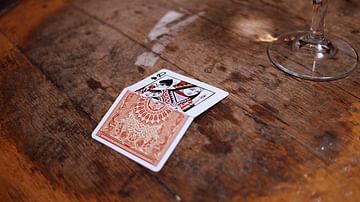 Beloved magician, inventor and TV consultant Alan Rorrison has taken one of the most famous card scams, The Two Card Monte, and combined it with The Anniversary Waltz and Torn and Restored Card to making a mind-boggling prohibition-themed effect that you’ll want to perform at every event.

Prohibition Monte starts by explaining how during the prohibition era, back alley gambling games using poker-sized playing cards were illegal. So, in an effort to circumvent these laws, con artists would often rip cards in half and just use half-sized cards.

You then remove two different torn half cards, show them front and back, and invite the spectator to play the classic con game of “Follow the Queen”. After showing them how it works and baffling them with your ability to make a Queen, which was fairly placed into your pocket, appear back in your hand, you allow them to up their chances by signing the face of each card.

After the cards are signed, you repeat the challenge. Despite how fair you make everything seem, the spectator will be unable to truly follow the location of each card—ultimately proving the power of this legendary scam.