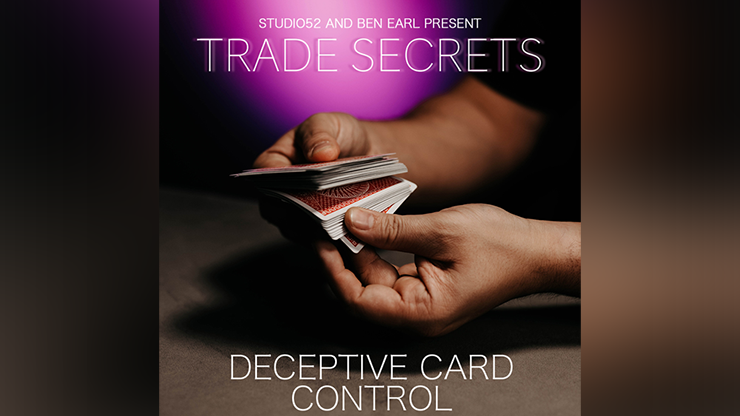 If you want to make the act of controlling a card to the top MUCH more deceptive, then this download is packed with expert touches, technique, and psychology to do just that-turning a very simple approach to control into something masterful. The best part is…only beginner skills are required!

Ben Earl has fooled Penn and Teller, amazed David Blaine, and is a world-renowned performer, creator, and teacher of magic. Now he wants to share his trade secrets with you. In this Trade Secrets project by Studio 52, Benjamin Earl will share his YEARS of experience, techniques and psychology behind his innovative magic.

“Ben Earl has turned his analytical mind toward the fundamentals of sleight of hand and we all benefit. His clear vision, fresh approach and articulate explanations are a level above. When Ben speaks, I listen!”
– David Williamson

“Trade Secrets are a must have if you want to take your magic to the next level. Ben is a great teacher and a true magic master. This a no-brainer…get these!”
– Bill Malone

“Trade Secrets represents a deeper level of thinking and analysis on the impeccable execution of sleight of hand. Who better to be our coach than Benjamin Earl. This new series is simply outstanding.”
– Michael Vincent

Trade Secrets by Benjamin Earl is a one-of-a-kind opportunity to INSTANTLY learn card magic from a master. Key moves that will make any routine better including: The Combination Shuffle, The Overhand DPS, Finessed Frank Thompson Cut and the False Swing Cut.

In Trade Secrets, Benjamin Earl goes meticulously through each move; not only showing the hand positions — but also the psychology of the moves AND how to maximize impact for your spectators. He will give you the tools to choreograph YOUR sleight of hand moves so perfectly that they will become undetectable to your spectators. True magic.