Bizzaro and The Shocker LIVE ACT 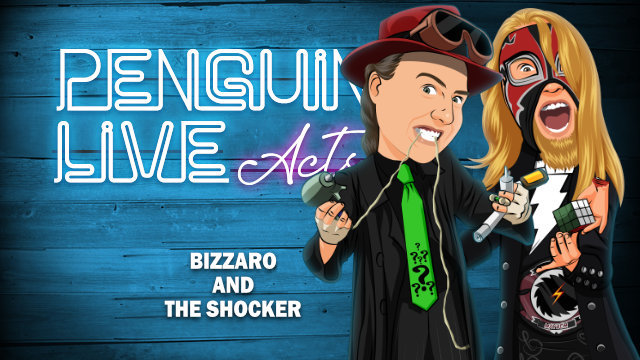 “Bizzaro is Brilliant! One of the top creators in modern magic” – Jeff McBride

What will they teach?

Parlor/Stand up Magic and Comedy

Full Contact Card Trick– A signed card is found after taking a trashcan lid to the head.

Visual Epic– Shocker’s take on the classic “Mental Epic” plot, where at the end a prediction written on a thin piece of paper visually changes without being touched. (You might have seen it on a little show called “P&T Fool Us”)

Off-Hand– Shocker takes the magazine/book test and gives it a kicker ending.

You Salty Bro?– Bizzaro’s hybrid of a miser’s dream and salt pour

Rubik’s Chopper– THE comedy arm chopper routine that has been seen on CW’s “Master’s of Illusion” and “Showtime at the Apollo”.

Plus tips on performing, character, props, and other tidbits you can only get from working pros.

Bizzaro has been featured on Masters of Illusion, and the Travel Channel. He is an accomplished prop builder and has made custopm items for ‘The Carbonaro Effect’ and David Copperfield.

The Shocker has been seen on ‘Wizard Wars’, ‘Fool Us’, ‘Masters of Illusion’ and ‘Showtime at the Apollo’. He is featured in Las Vegas at the Sapphire Comedy Hour – Voted best Comedy in Vegas three years in a row.

Together Shock & Bizzare have been featured at the Magic Castle in Hollywood.