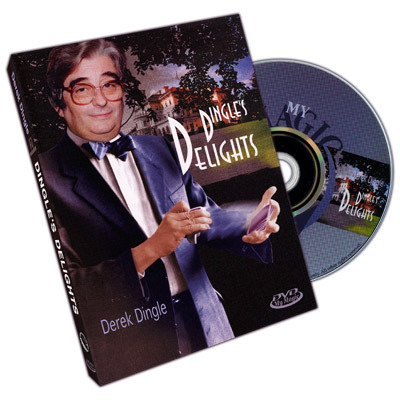 Derek Dingle has been one of the most influential close-up magicians of the 20th century. He created many outstanding routines that are in use by the leading professionals in our field. He went from an outstanding amateur to a successful professional and on this DVD you get to see him perform and explain the routines that he regularly used in his professional career.
The DVD begins with a live lecture, taped in Sacramento, California in 1998, where he performed and explained his favorite routines.

The Derek Dingle Fabulous Jumping Card Trick: Derek’s handling for Edward Victor’s Eleven Card Trick where the spectator deals eleven cards into your hand but each time you count the cards you only have ten. This is repeated with cards added to the packet and taken away but the total is never as it should be.

New Wave Cigarette Through Quarter: A repeat cigarette through quarter routine like no other. After penetrating the center of a borrowed quarter with a cigarette you confess that you switched coins and then you repeat the sequence with the “real” quarter.

Silver Quick: A clean coins across routine where four coins vanish from your hand and appear on the spectator’s palm and in her clenched fist.