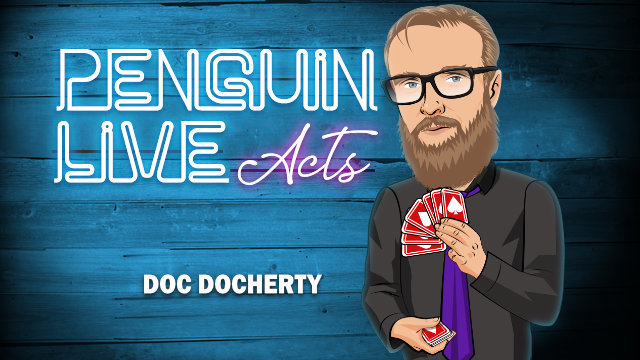 Close up restaurant style performances that are easy to learn, and most of all makes the spectators feel like they did the magic!

Narlo’s Invisible Palm Aces- The spectator is the magician as they palm and transfer invisible Kings from one pile to another. To make it even better the spectator turns them into four Aces!

World Famous Salt(Sugar) Trick- a restaurant favorite where sugar vanished and reappears in a napkin. A great TT steal is used to create a stunning effect that can be recalled during the entire walk around set.

Card at Unknown Number- A random number is created but unknown until the deck is out of the magicians hands. Then the previously selected card is at that number!

Invisible Biddle- The classic Biddle trick where the spectator turns his card invisible as soon as they touch it!

The Vegas Test- The spectator is tested on wether or not a Vegas trip would be a good choice. The spectator passes the test with flying colors!

The Eagles Mean They Can Fly- Doc’s walk around coins across handling.

Super Easy Double Leaper– a new handling of a classic from Expert Card Technique that requires no palming.

In through the Outdoor- a classic puzzle , the In & Out boxes updated with a solid ending!!!

Card to Wallet- Doc’s favorite way to end a ACR is this. This handling gives a reason to bring the wallet into play and is very easy and can be done without a palm.