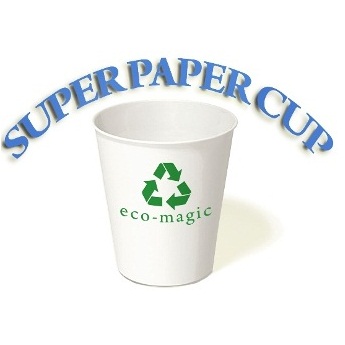 Finally an ideal trick for the environmentally-friendly generation!
Instantly recycle a paper cup in full view…

There will be unlimited possibilities for use “Super Paper Cup”. You can make wide-range of magic from serious magic, close-up illusion, comedy, even ECO-MAGIC!

(Sample Routine 1)
Magician introduces two cups, one cup is called “Magician”, the other cup is called “Assistant”.
“Magician Cup” is now placed into the paper bag, and “Assistant Magician” is now crushed. The bag is closed, so it is impossible to change the places.
However, the cups are “magician & the assistant”, so they quickly change the places like a famous stage-sized Illusion!

(Sample Routine 2)
Magician shows a piece of paper, then he crumples the paper and tears it off in half.
Now, the crumpled paper instantly and visually changes into a paper cup!