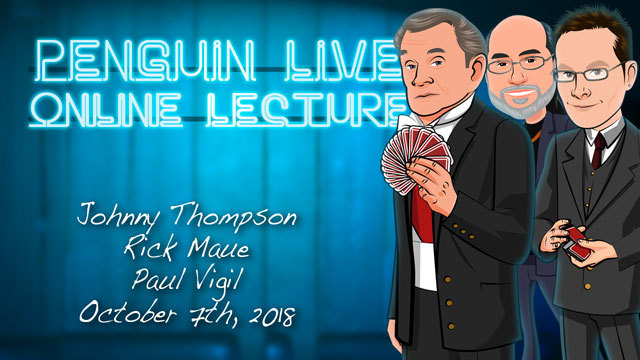 This special Penguin Live lecture features three fascinating talents talking about mentalism and illustrating their unique perspectives with solid routines.
Of course, in addition to the top-quality routines taught, you’ll also be treated to the thoughts, philosophies, and stories shared by these three gentlemen.This is an event you don’t want to miss!

Johnny Thompson:
Within the magician community, Johnn Thompson is considered a virtuoso, widely known as a mentor and teacher of magic, and a creator of tricks, as opposed to simply a performer.

As a magical consultant and illusion designer he has written, developed and provided material for magicians Siegfried and Roy, Penn and Teller, Doug Henning, Lance Burton, Criss Angel and David Blaine. As theatrical special effects designer and consultant he has invented and presented a variety of unique optical illusions for trade shows, industrial shows, theme parks, musicals and plays. Bush Garden’s Williamsburg production of “The Ghost of the Globe,” a Shakespearean fantasy with over thirty-five unique special effects, was Thompson’s initial venture into theme park attractions. Many of his original optical illusions and special effects techniques have been featured in theme parks, The Smithsonian Institute, Chicago’s Museum of Science and Industry and hundreds of trade shows, including the White House Conference on “The Industrial World Ahead Congress.”

In 1999, he was awarded one of the highest honors in the magician community, a Masters Fellowship with the Academy of Magical Arts.

Paul Vigil:
Paul is known as one of the most discriminating magicians / mentalist in the world.
He has been practicing the art of magic since the age of 5, and 10 years later Paul under took the challenge of becoming a professional performer. Within a further year Paul had become one of the most in demand performers in his native Salt Lake City.
The center of magic, Las Vegas, soon called for Paul to join the ranks of the industries leaders and in 2002 Paul moved to Las Vegas, soon to establish himself as one of the finest performers the city has to offer.

Rick Maue:
Rick’s interest in magic started when he was five years old.
He began working on Séances in early 1976, in preparation for a two hour Houdini Séance on the 50th anniversary of his death. Since then, has created/performed in well over a thousand séances.

Following a few decades of creating and performing a combination of magic, mentalism, and Haunted Magick, Rick began releasing material such as “Haunted Magick” and “Deceptions” to the magic community through Deceptions Unlimited, which he owns along with his wife Tammy. Rick released his first full-size book in 2000 entitled “The Book Of Haunted Magick”, which has sold in over 30 countries.