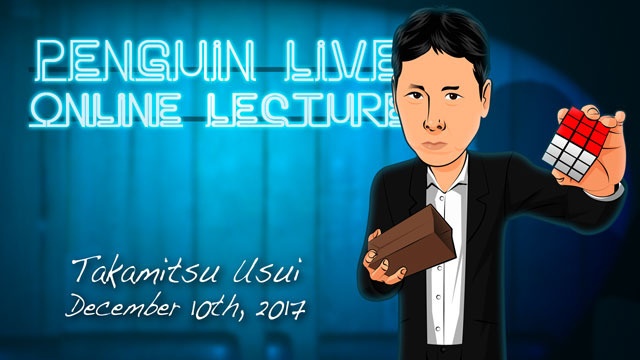 “As the originator of the one hand quick solve, Takamiz Usui is the most influential creator in the field of Rubik’s Cube Magic. His ‘The Cube’ DVD is required viewing for anyone seriously interested in performing cube magic.” – Karl Hein

“I have seen Takamiz Usui perform his amazing Rubik’s Cube Act TWICE!
I thought I could catch if I saw it again… but he fooled me even more the second time around. I would love to learn how you do it! The best I’ve seen.” – Paul Gertner

“Coins, Cards, and now Cubes. The world of magic has expanded due to the ingenious methods and concepts of Takamitsu Usui.” – Garret Thomas

“Takamiz Usui’s work is absolutely astonishing in every possible respect. At The Magic Castle two years ago, I saw him blow away a group of magicians—magic’s best and brightest—with his his Cube work. Since then, his work has continued to evolve in new and exciting directions. Don’t miss this lecture under any conditions—it’s going to be a must-see!” – Daniel Ulin

“The tipping point in cube magic was when Takamiz released his one hand technique and it spread like wildfire to become THE ungimmicked instant solve solution of choice.” – Kev G

Easy Vanish Spectator sees two cubes and chooses one. The other disapears.

Casual Bag Solve Just put the mixed up cube in a bag and it will be solved.

Completely Examinable Figure Change Magician and spectator examine all items. However, even so, it will change figure.