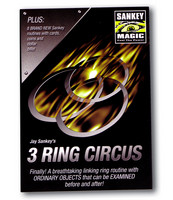 This marvelous routine features one eye-popping, magic moment after another! And thanks to the inspired structure, the rings can be examined before and after the routine!

Included are the custom set of rings used in ‘3 Ring Circus.’