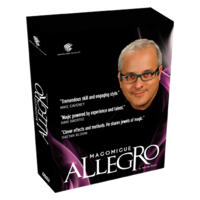 PROFESSIONAL MAGIC FROM ONE OF SPAIN’S LEADING PERFORMERS

Miguel Puga, also known as MagoMigue, reveals some of his most cherished secrets. More than two dozen professional and award-winning routines including five of the best stand-up routines you will ever see.

MagoMigue is one of Spain’s leading performers. As a FISM award-winning magician he combines skill and entertainment in his theatre, cabaret and close-up performances.

DISC 1 – STAND UP Filmed at the theater in Ansiao, Portugal, you will witness five of the best stand-up routines you will ever see. Audience pleasing material that will baffle and amaze. These are without doubt some of the finest professional routines ever to be released. Card and Glass, Card Printing, Bill in Lemon, Silver Prestige, Cards to Pocket.