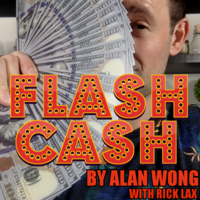 That’s a stupid question. EVERYONE wants $2,000. And THAT’s what makes FLASH CASH such a POWERFUL illusion. IT DOESN’T JUST AMAZE PEOPLE; IT MAKES ‘EM JEALOUS.

You show the fronts (AND BACKS) of about 20 pieces of blank gray paper—the same color paper that the new U.S. $100 bills are printed on. Then a single $100 bill appears. THEN THE WHOLE STACK OF BLANK PAPER CHANGES TO $100 BILLS—FRONT AND BACK.

I first saw Flash Cash at Magic Live 2016. I bought one and put it RIGHT on Facebook. Not only did I get a ton of views, I got a ton of magicians writing me, asking where THEY could get the trick. I didn’t reply…because at the time, Penguin didn’t have the trick in stock and you had to go through Asia to get it. But now, I’m so happy to say we’ve got it available, right here in the U.S. AND unlike other bill tricks, you don’t have to use your own money to create the illusion; we’re going to give you everything you need.

This trick is everyone’s dream. Not just the magician’s dream—the spectator’s dream, too.