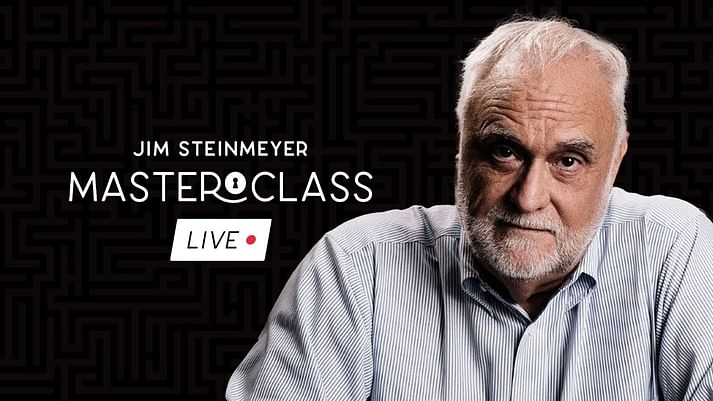 We are thrilled to announce that Jim Steinmeyer will be the August Masterclass instructor. Steinmeyer's place is the pantheon of magic legends is secure: he has designed illusions for stage and screen, including some of Broadway's most memorable magic scenes. He has worked with all the greats in magic, from Orson Welles to Doug Henning to David Copperfield. And his close-up and parlor innovations are widely regarded as game-changing and revolutionary. His "Impuzzibilities" series collects all his self-working, amazing close-up magic. As a writer, Steinmeyer has penned some of magic's most lasting modern titles: Hiding the Elephant, Device & Illusion, and The Last Greatest Magician in the World.

“Which comes first, the music or the lyrics?” Magicians seem to be perpetually amazed, and confused, by the process of invention and design. But there’s no better way to finely tune your own performances than to develop your own process of invention, flexing your creative muscles in magic. This is a Masterclass in looking forward, in creating and refining your own magic and, in the process, learning how to innovate. It’s a process that will serve you for a lifetime in magic.

There’s probably no one more qualified to teach this subject than Jim Steinmeyer. His developments in magic have been called “the defining illusions of a generation” in magic. One of the most awarded and recognized magicians, he’s also received the Drama Desk Award and is an L.A. Times Best-selling author. He has created effects some of the most iconic moments of modern Broadway, as well as some of the most admired tricks in modern conjuring. And of course, he has created hundreds of effects for magicians like Doug Henning, David Copperfield, Siegfried and Roy and many other magicians.

In looking at the subject as a Masterclass, Jim doesn’t focus on stage illusions, but on the sort of magic that will work best for you. He examines how great magicians in the past invented their magic—he’s made a study of this fascinating subject for years—and explains what we can learn, and how to take important steps in developing your magic. Most of all, he explains his own formula, step-by-step, and his own goals for creativity.

Uniquely, Jim is able to address the totality of the process. The first 90-minute Masterclass will focus on “Innovating and Developing Tricks,” focusing on the tricks themselves. The second session will focus on “Devising and Writing Presentations,” as the ultimate goal should always be integrated routines, complete effects, that serve the performer. In this way, he will have a chance to look at both the “music” and the “lyrics,” demonstrating how all the pieces can be put together.

The Masterclass will deliberately focus on a wide range of effects, and you’ll invariably be inspired by some unusual interactive and close-up effects which will be useful in your own shows.