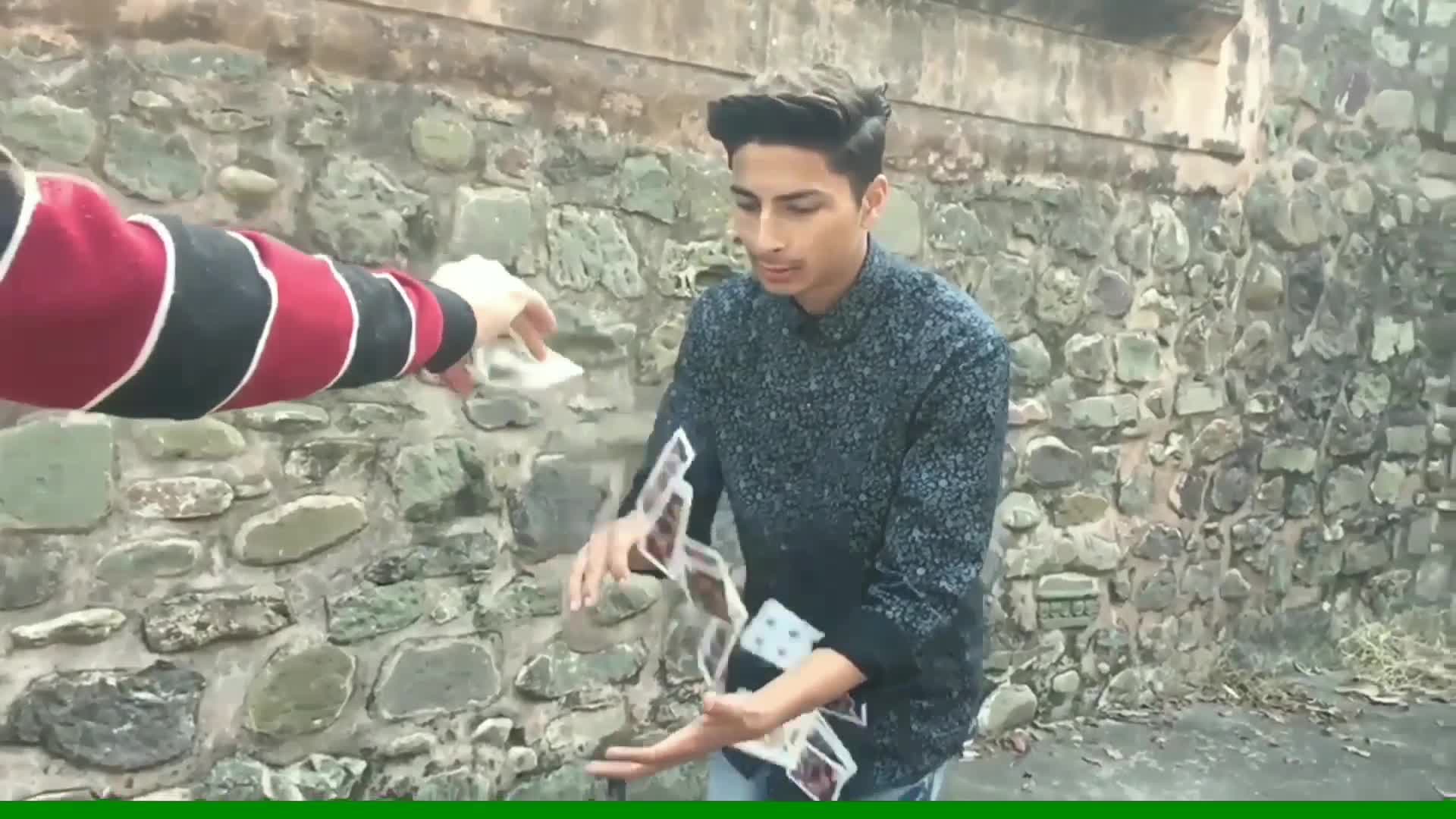 IMAGINE HAVING ABILITY TO CATCH SPECTATOR’S CARD! IN FRONT OF THEIR EYES!!!

THIS EFFECT IS COMPLETELY DIFFERENT FROM ANY ORDINARY CARD TRICK.

In This Effect- Spectator can see any card, They have a card in their mind, You give the deck to spectator, Spectator themselves spring the card towards you and you catches one card in front of their eyes and that card is the Spectator’s card!!

THIS IS EFFECT THAT YOU CAN PERFORM ANYWHERE YOU LIKE- AS A STAGE ROUTINE OR AS A CLOSE-UP ROUTINE.

•NO MAGNETS
•NO SLIGHTS OF HANDS
•NO PALMING (you can clearly show your EMPTY hands.)
•IT’S VERY PRACTICAL
•EASY TO DO
•DOWNLOAD THIS NOW AND GET AMAZING AUDIENCE REACTION!!

Additional Supplies May Need To Be Purchased To Perform This Effect.

END_OF_DOCUMENT_TOKEN_TO_BE_REPLACED

“I’ve always felt that my good friend Anthony Blake ranks among the finest mentalists in the world. If you have a chance to see him, take it.” – Bob Cassidy

“Anthony Blake is the Juan Tamariz of mentalism.” – Dani DaOrtiz

“When you look at Anthony Blake, you see an image of the real mentalist. He has charisma. He has a presence. He has a personality. Anthony is a friend of mine for 20 years and I really admire him for his genius. He has a vast knowledge. Anthony has invented dozens of special routines and strong. His technique is always perfect. His nail writing skills are amazing Anthony is the perfect combination of everything you need as a mentalist. It is an honor to listen and learn from one of the true artists of our time.” – Lior Manor

“Anthony Blake cannot walk the streets of Spain without crowds calling out “BLAKE….BLAKE!” He is not only a brilliant creator and artist, but understand what we can call the science of Mentalism. And to see his show or appearances is illuminating and in its presentation –earth shattering. To learn from him is to have your eyes reopened.” – Mark Salem

“Anthony Blake is a master showman. He is a huge stage and TV star in Europe
and South America because he knows how to touch people deeply with his magic
and mentalism. He rarely shares his ideas, so this is a special opportunity
to learn from someone with decades of experience at the highest levels of
show business.” – Ken Weber, Former president of the P.E.A., Author “Maximum Entertainment”

“Anthony Blake is a Spanish legend. He performs with great passion and beautiful artistry. Learning mentalism from Blake will feed both your mind and your soul.” –Joseph A. Curcillo, Former president of the P.E.A., Author, Performance on Trial: The Case for Better Entertainment

BTW: Technique of the swami gimmick
Balloon effect
Long distance call – My tribute to Cardini
Blindfold technique with a twist
2 papers and 1 spectator
and more!

Anthony Blake, a native of Oviedo, has studied for many years techniques and disciplines that have allowed him to face different challenges throughout his professional career.

He left his medical studies and was inclined to delve into the power of the mind. His greatest professional recognition came when he received the Dunninger award in 2003-2004 for excellence and professionalism in the development of his career as a Wizard of the Mind.

Anthony Blake has developed his career in two main sectors: theater and the media.

The live shows, before the public, are a continuous challenge. From 1983 until today, he has created various shows in different formats, which have been presented by all the theaters of Spain and beyond our borders. With great success with the public and with the critics.

His collaboration on television programs has allowed him to popularize his Magic. He highlights his participation as a regular collaborator in “Un, Dos, Tres”, in its beginnings; and later in the program of “Carlos Herrera”, “Martian Chronicles”, “Sunday to Sunday”, “Another Dimension” as well as programs presented by Blake himself: “In No Man’s Land”, “Blake the Challenge”, and “Blake” among others.

He has participated in numerous radio programs as well as in film.

Anthony Blake loves to share some of his knowledge in order that the mind stops being a great unknown. With this pretense, he has published three books, “Tu poder mental”, “Tu poder intuitivo” and “Lo que se del más allá”, in which he proposes techniques and exercises to develop the power of the mind. Exercises on how to improve memory, develop your intuition, master the subconscious or control and interpret dreams among others.

He has also given conferences and courses on non-verbal communication, Neurolinguistic programming, and coaching.

Where can you see the greatest creators and performers share their magic in front of a live audience and then teach you to do it? Only Penguin LIVE!

Magicians flock to see workers give talks. Why? Because these guys see and learn things that you won’t find in any book or video. Yes, you’ll be learning some incredibly powerful A-material, but the INVALUABLE stuff will be the insight you learn along the way.

END_OF_DOCUMENT_TOKEN_TO_BE_REPLACED

Ablim by SaysevenT video DOWNLOAD. Visual appearing any small object at plastic in a second.

Watch the demo and learn it now!

END_OF_DOCUMENT_TOKEN_TO_BE_REPLACED

PROMO PRICE NOW FOR $10 ONLY? LIMITED TIME, GET YOURS NOW! AND ENJOY!

Its been almost 8 years since invented Uncanny aka CANDEMONIUM is now ready to learn.

After years of developement we at RMC and Arnel Renegado created a method to everyone for them to make it them self EASILY and to know how the gimmick is working, beyond that is a step by step traning on how to make the gimmick on an in deft explanation. The secret is on your hand now! enjoy!
Imagine you show a sealed soda can and with a power of your mind you cause a soda can to open itself.

END_OF_DOCUMENT_TOKEN_TO_BE_REPLACED

Visually pull a drinking straw through the pop tab of a soda can. Perform a solid through solid effect with ordinary objects that you can have fully examined at the end of the trick. This is StrawCan by Hoang Sam.

StrawCan uses a simple gimmick that you learn how to construct with materials you already have at home. The visuals are crazy. This is the perfect trick for social media, but can also be a phenomenal effect for when you are hanging out with your friends. You’ll not only learn how to make the gimmick, but the special moves to be able to hand the props out to be inspected by your audience. Add an off beat solid through solid to your repertoire with StrawCan by Hoang Sam.

END_OF_DOCUMENT_TOKEN_TO_BE_REPLACED 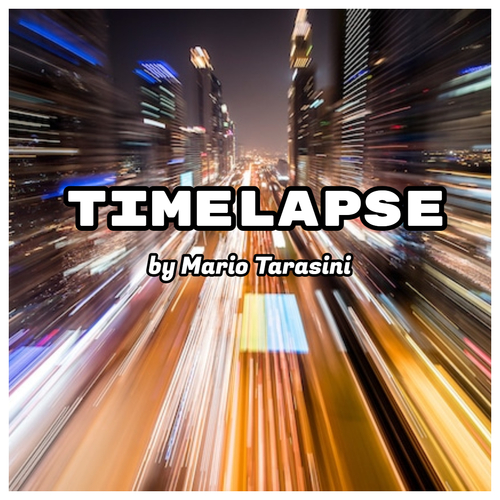 Effect:
The magician puts a black sticker on the card box.
The sticker is covered with a card and it disappears!
That's not all ...
The sticker after a while magically appears on the card!
Gimmick is easy to make, but don't be fooled…
Although the trick is simple, but very visual. 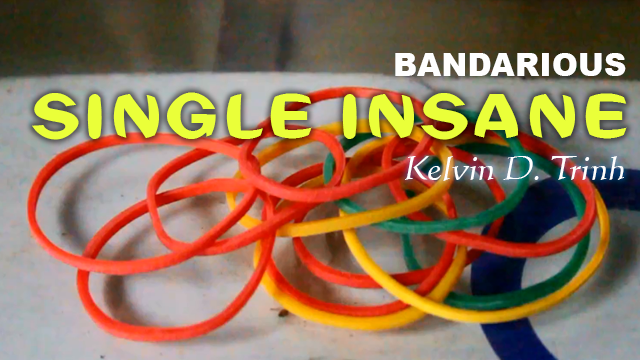 This’s it again! You can’t imagine what you can do with only one rubber band. The first episode of Bandarious – Single Insane – will brings you three new amazing effects with a rubber band that you can perform everywhere. And also, all of them are totally impromtu, no any gimmick required. 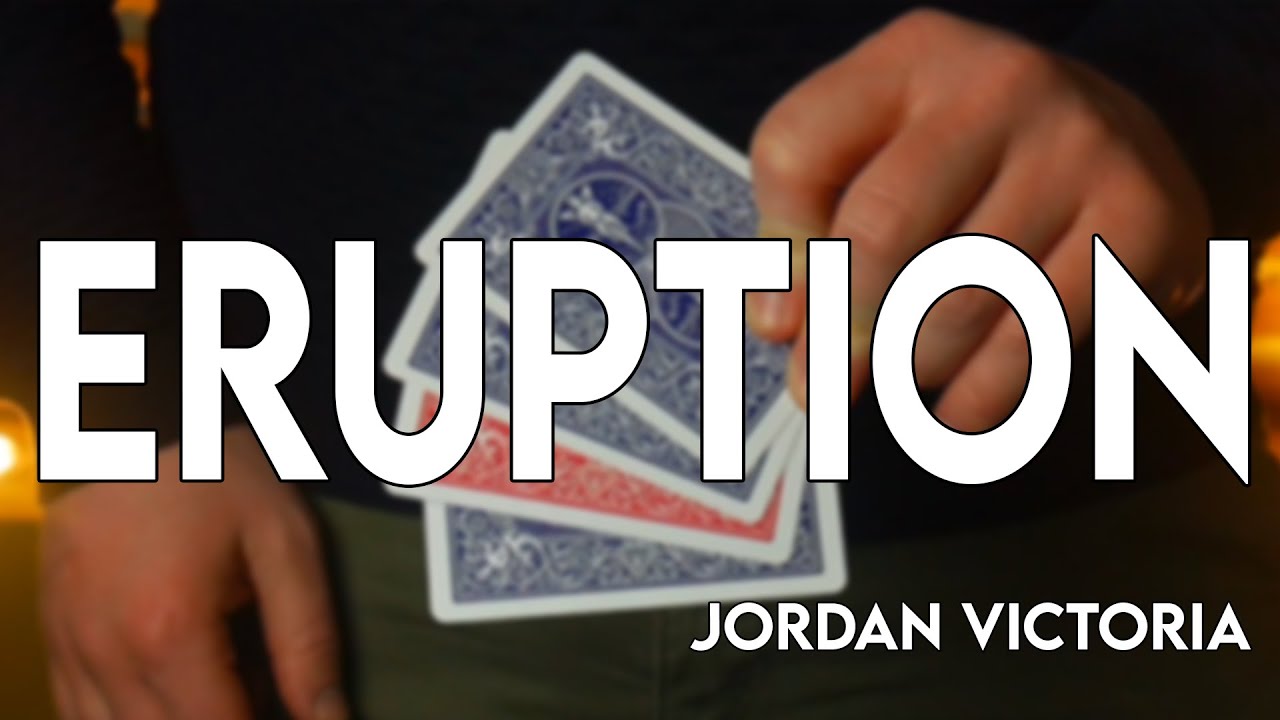 From the mind of Jordan Victoria (creator of Abra, Melty, Unlink,...) comes ERUPTION.

ERUPTION is the perfect B-Wave on the market. Nothing more.

In this effect you will learn how to ask your spectator to name any queen to find it reversed in your packet. Over this effect - the card is the only one printed and has a different back.

You will also receive a useful packaging to customize (as seen on the trailer) which allows you to justify and bring your packet trick everywhere (fits perfectly in a small wallet).

This method takes years to be developed. And we are now happy to share it with the magic community ! 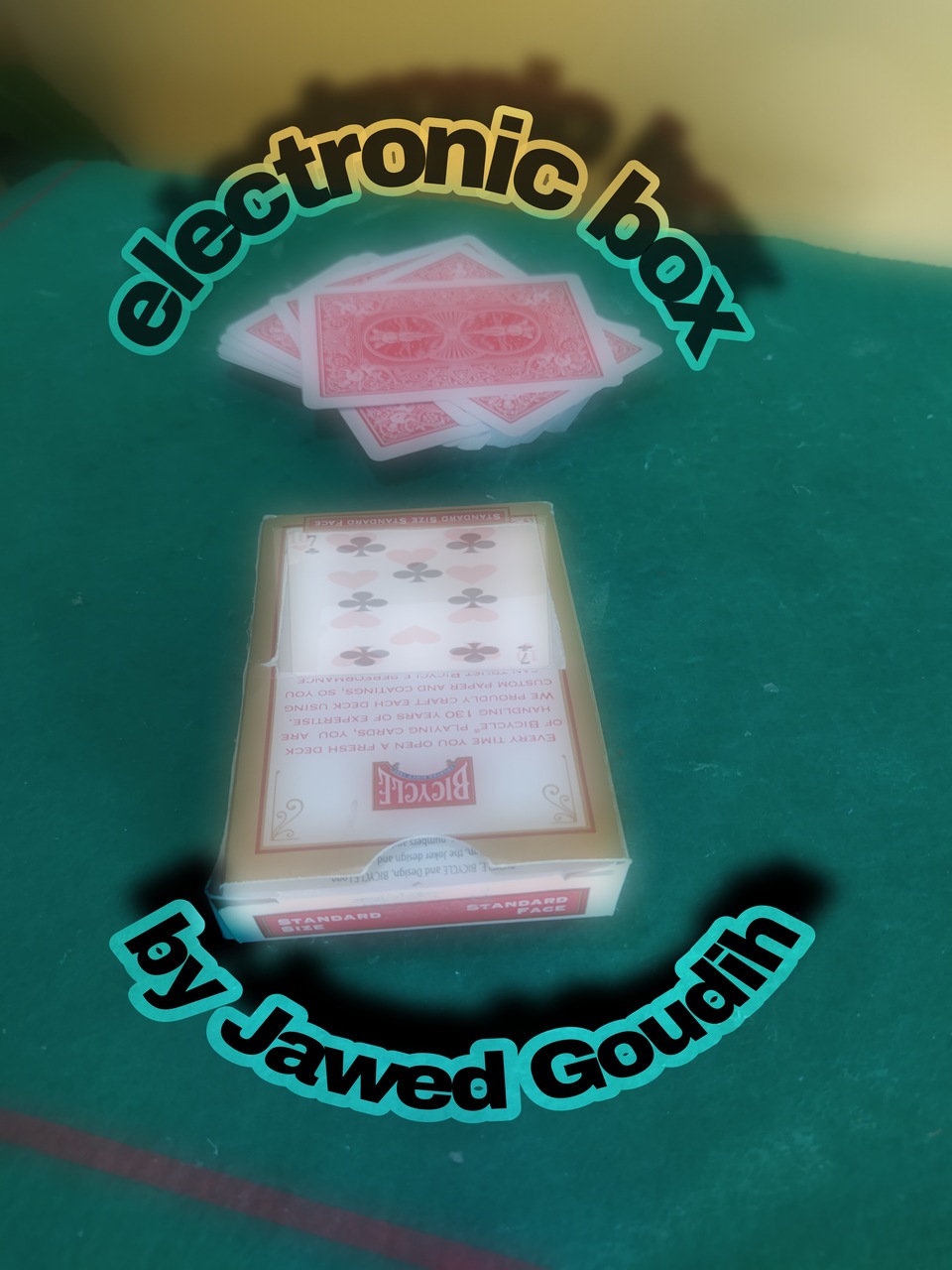 A card is selected by the spectator and
the card get lost in the Deck One touch by the magician finger
and the card visually appear in the box,the card then is handed out as souvenir.

the gimmick works for ever or at least until you get board of it
There are no flaps, wires, Chichi magnets or hidden levers.
as a bonus routine you can change the card in the box to choosing one with the spectator signature

The spectator writes a piece of personal information on a random playing card which is then shuffled and lost in the deck. The deck is spread towards the spectator and they confirm their card is indeed lost somewhere in the deck, which is then closed and placed face down onto the table.

And yet, you will always be able to peek what was written, in the fairest manner possible.

Thanks to the structure and psychology of this peek you will always be in a position to be able to obtain the information effortlessly, without any out of place moves and with zero heat on the moment.

It literally takes a few seconds and all of the moves look and feel exactly how they would if you were in fact, doing nothing!

There is no rush or pressure to get your peek as you will be doing it right in front of your spectators but thanks to the psychology it will be hidden in plain sight!

This really is as clean and simplified as it sounds.

Any deck, Any time, NO gimmicks!

Utilize a full peek of the playing card to easily obtain names, words, star signs and drawings made by your spectator as well as multiple pieces of information.

Fraser will also teach his justification for a use of a deck of cards in performances of Mentalism.

This is different to what Fraser has released in the past.

It requires a beginner level knowledge of basic sleight of hand.