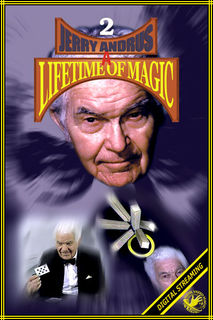 Jerry Andrus is one of the most original thinkers in magic and beyond. His magic and optical illusions have been featured on television shows and in magazine articles all over the world. These programs offer you an opportunity of a lifetime where you can see him perform and explain many of his greatest inventions.

Volume two of the series features many of the card routines and sleights that gave Jerry Andrus his reputation of being one of the most creative card magicians of the twentieth century. The only non-card routine included is the famed Accupressure.

Routines performed and explained:
►Accupressure: A large steel ball appears in the palm of our hand after showing both hands empty.
►Whispering Aces: A multiphase routine where four signed aces are lost in the deck but keep coming back to the top. The final two phases have the aces change place with four indifferent cards on the table and finally vanish to appear in your pocket.
►To Any Small Number: A signed selection is lost in the deck. The spectator names a number between one and five. When they count to that number they find their selection.
►Slop Triumph: A unique two-phase routine where cards are shuffled face-up and face-down. When the deck is spread the cards are all facing the same way. The first phase incorporates a selection.
►Tracker Jacks: Two jacks are placed face up and a signed selection is placed face down in different parts of the deck. When the deck is spread the selection is found sandwiched between the two jacks.
►Any Card, Any Number: A signed selection appears at a freely thought of position in the deck.
►Similarities: A multiphase routine where you divine the names of selected cards with a final kicker where an indifferent card changes into the selection.
►Bowed Deck Display (performance only): A wild looking flourish with a warped deck of cards.