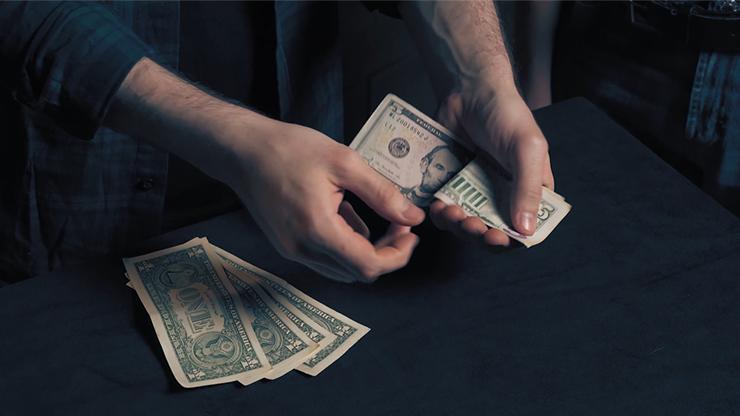 SHORT CHANGE PLUS is an ideal routine for close up magic. The magician tells a little story about a problem he had with money when paying for a dinner. During the story various funny situations with magical effects occur and everything ends with a surprising ending.

This is an easy trick to do and can be reset in an instant to do it again. Here he left a summary of the story:

"I am going to tell you a funny little story that happened to me in a hotel restaurant when paying for dinner.

When I ask the waiter for the bill, he tells me that the total is $50, so I took my money and counted $50 on the table, and I also counted $4 asa tip for the waiter.

The waiter takes the $50 but when I recount the bills he clearly counts$45 and tells me that $5 is missing.

Surprised I took the money and counted it again about the table slowly and I counted $50, but the waiter insisted that there is $45 and that there is$5 missing.

At this point we called the manager of the restaurant to come and count the money as if to end the argument, but the manager takes the money and when we count it on the table he slowly and clearly counts only $40 and tells me that it is actually $10 to go to$50.

At this point I told the manager that I didn't want any more trouble and told him that I was going to go to the hotel room to look for the $10 that is missing, but the manager of the restaurant told me that in reality, I not only had to pay the $50 for dinner but also had to pay $350 for all the dinners of the week that were missing and that the total debt is $400.

At that moment I took all the money that was on the table along with the waiter's tip and looking at the manager with a smile I told him to pay attention because I was going to solve this problem magically and I blew on the bills that I had in my hands.

And now, I clearly counted on the table, first the $4 tip from the waiter and now incredibly the other bills had magically turned into 4 $100 bills so I was able to pay the $400 bill!!!!.

Happy ending for everyone!!

(Based on an idea by the wonderful Professor Dai Vernon)