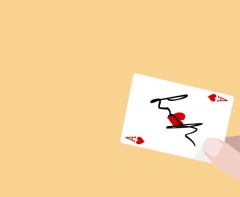 This is Signature 2.0. It’s one of my favourite card magic effects to perform to laypeople, and it can now be yours.

It’s my impromptu take on the Anniversary Waltz plot. Two spectators each select and sign a card. Then, one of the signatures visually transposes to the other card. It’s visual, it’s easy and it’s impromptu. It has been my opener for four years now, the very first effect I do when I want to perform to a group of people.

What do I get?

You’ll get a 30 minutes in-depth video explanation of the effect. Everything is filmed from multiple angles and you’ll also get slow-motion clips of the sleights in it. You will not only get a new effect, but also a new original sleight, which allows you to invisibly force a card.