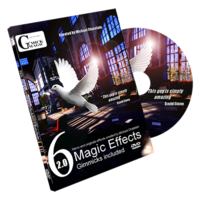 On the heels of the stock-depleting success of the first SIX DVD, we owed it to ourselves to continue this incredible adventure by offering you SIX 2.0.

The concept is the same… The DVD will explain each step of every trick described below, with M as teacher. As with volume 1, everything you’ll need is included with the disk.

Here is an accurate description of each effect as well as a demo video:

You loved volume 1, you loved the different subtleties brought into play. You’re guaranteed to love volume 2!
1) Through Box: An absolutely incredible and impossible passage of matter through matter
Show your spectators a simple box of Tic-Tacs.
The box is completely ordinary, not gimmicked in any way.
Your spectators will quickly note that in the box there are only 2 tic tacs, one orange-flavored and one lemon, and nothing else.
Ask a spectator to choose one of the two. Hold the box at the tips of the fingers in full light hiding nothing. Count to 3 and in full view the selected piece of candy passes through the bottom of the box.
How can a simple piece of candy pass through a simple box? An amazing mystery, especially as the spectator can now immediately eat the candy.

– The box is ordinary and can be examined with no concern.
– The piece of candy literally passes through in plain sight and you hand it immediately to the spectator, no switching!
– You can do the effect again with no preparation.
– I had the chance to do this trick for the magician Dynamo and his troupe and none was able to figure it out!
2) Vision: A mental experiment with your deck of cards.
Take your deck and show the cards front and back. 52 different cards, of course!
Shuffle the deck in front of the spectators and invite them to help you if they’re willing.
Once the deck is well shuffled, you explain the following to one of your spectators:
“I am going to spread the cards face down between my hands and you will freely touch any card. Of course, I will turn my head so I’ll see nothing as the card is being selected.”
You then spread the deck between your hands and the spectator touches a card. You are immediately able to announce the card freely touched by your spectator. Do it again and again, you are always 100% correct.
How can you announce the name of a freely chosen card when you can’t see it?

– You use a normal deck of unmarked cards.
– The deck is shuffled in front of the spectators – no preset order or memory work.
– The experiment can be repeated indefinitely with no preparation.
– “I did this experiment at my booth the FFAP conference in St. Etienne with great success.”
3) Gravity: A perfect close-up experiment, a unique curiosity!
Show two pencils to your spectators and ask them to chose one of them, no force.
Once a pencil is chosen, take your two decks of cards, place them upright on the table a few inches apart. Place the two pencils with the ends of each pencil supported by the two decks.
Suspense! Slowly remove one of the two decks. Gravity would be expected to cause the pencils to fall on the table as you’ve visibly removed one of the supporting decks.
But NO! Your spectators won’t believe their eyes when one and only one pencil falls. The selected pencil remains suspended with no visible support.
An incredible experiment that can be performed surrounded. Pick up the suspended pencil at the tips of your fingers and immediately pass it out for examination.
Your spectators will try to reproduce this miracle – a wasted effort for them as it’s impossible. At every attempt, gravity will do its bit causing the pencils to fall.

– An incredible experiment that can be presented under any conditions.
– No force, the selected pencil will always be the one that remains suspended.
– Completely examinable. Normal decks of cards. You use your own pencils.
– No glue, no thread, no visible or even INvisible support!
4) Melt: Easily learn how to make gimmicked cards!
In this second volume, M explains a simple method for making up a shrinking card effect.
Show your deck and turn up the top card. Pass your hand over it and in seconds the card is reduced to half size!
A truly curious illusion done under the nose of your spectators.

– The basis of this effect is simple and efficient.
– The card shrinks in a fraction of a second from its normal size. It miniaturizes as you pass your hand over it.
– The miniature card can be examined – it’s an ordinary card!
5) Hearts: A perfect trick for your evening performances (Marriage, Valentine’s Day, etc.)
Present your deck of cards and show it front and back. Point out that on the back of each card a little heart is indelibly depicted.
Invite a spectator to freely choose a card. There’s no force and the card can be signed.
To make the card truly unique, you draw a second heart with your marker.
Show that this card is unique since it alone has two little hearts on the back, one at the bottom and one at the top.
Show your hand empty and bring it toward one of the two hearts… slowly you move the drawing!
How is it possible to move a simple drawing?
You continue to move the drawing until the two hearts merge into one.
You immediately hand out the card for examination. It’s indeed the freely selected and signed card and it remains unique as it has now two hearts next to each other!

– No force, the spectator freely selects and signs the card.
– You really draw a second little heart on the card, however a few seconds later you can make it move.
– Very easy to do. You finish clean as the card is still signed, even though it now bears two hearts next to each other.
6) In the Box: The prediction is in the box.
Hand a little matchbox to your spectator explaining that there’s a prediction inside. Take out your deck of 52 ordinary cards. Invite your spectator to select a card and sign it if he wishes to. Once the card has been lost in the deck you ask your spectator to open the matchbox and to take out your prediction.
A match! Yes, a match in a matchbox, nothing unusual for the moment.
Invite the spectator to light the match and to pass it slowly over the deck. Ask him to open the box again. Well, well, what have we here? A playing card folded in quarters makes its appearance!
Yes, you’ve guessed it. It’s the signed selected card!

– The trick is self-working, no manipulation.
– The spectator can open the box himself both times.
– A single match is in the box and nothing else, however a few seconds later, the card appears therein!
– The matchbox is never concealed from sight from beginning to the end of the trick.