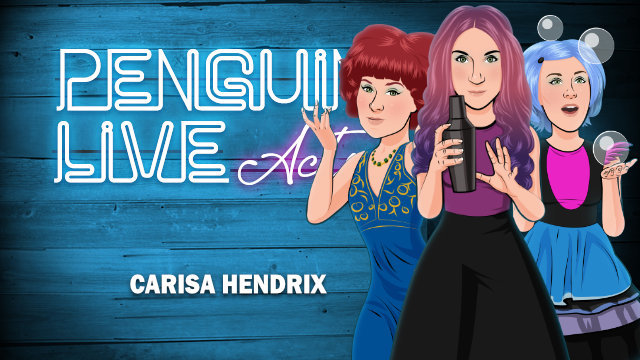 “I’ve seen her delight and I’ve seen her amaze. When Carisa is performing at Lucy Darling, anything can happen” – Rob Zabrecky

“Lucy Darling is one of the most exciting, hilarious magicians to come along in the last ten years. And some of the smartest
things I’ve heard a magician say are in Carisa Hendrix’s lecture.” – John Lovick

“Lucy Darling has figured out that rare technique of of being in the moment. Her magic is good, plus she is funny and cute. All of that makes her a force to be reckoned with. ” – Max Maven

“Carisa Hendrix brings a breath of fresh air to a stale magic community. She is a talented magician, improviser, and creator of new effects.” – David Kay

“I’ve seen Carisa Hendrix (AKA Lucy Darling) perform for 50 people and 700 people. She crushed it both times. Carisa thinks deeply about her magic, her character, and her methods and is about to share that information. Get ready to learn from her years of experience.” – Chad Long

“Carisa Hendrix has her finger on the pulse of the future of not just magic, but art and the performance of art. In addition to original methods of magic that are dynamite with a laser beam, application of the information in the act will make your own work both relevant and timeless. I’m 80% sure she’s the real Rowena Ravenclaw.” – Erik Tait

What will she teach?

Carisa Hendrix performs 2 full ACTS! The first is her award-winning character Lucy Darling; a woman known the world over for her wit, her charm, and her exceptionally good hair. The second show is for kids. You’ll meet DeeDee, the coolest girl you’ve never heard off. Carisa performs the same material in each act to demonstrate how you can use the props and effects at your disposal to perform for a wide range of audiences.