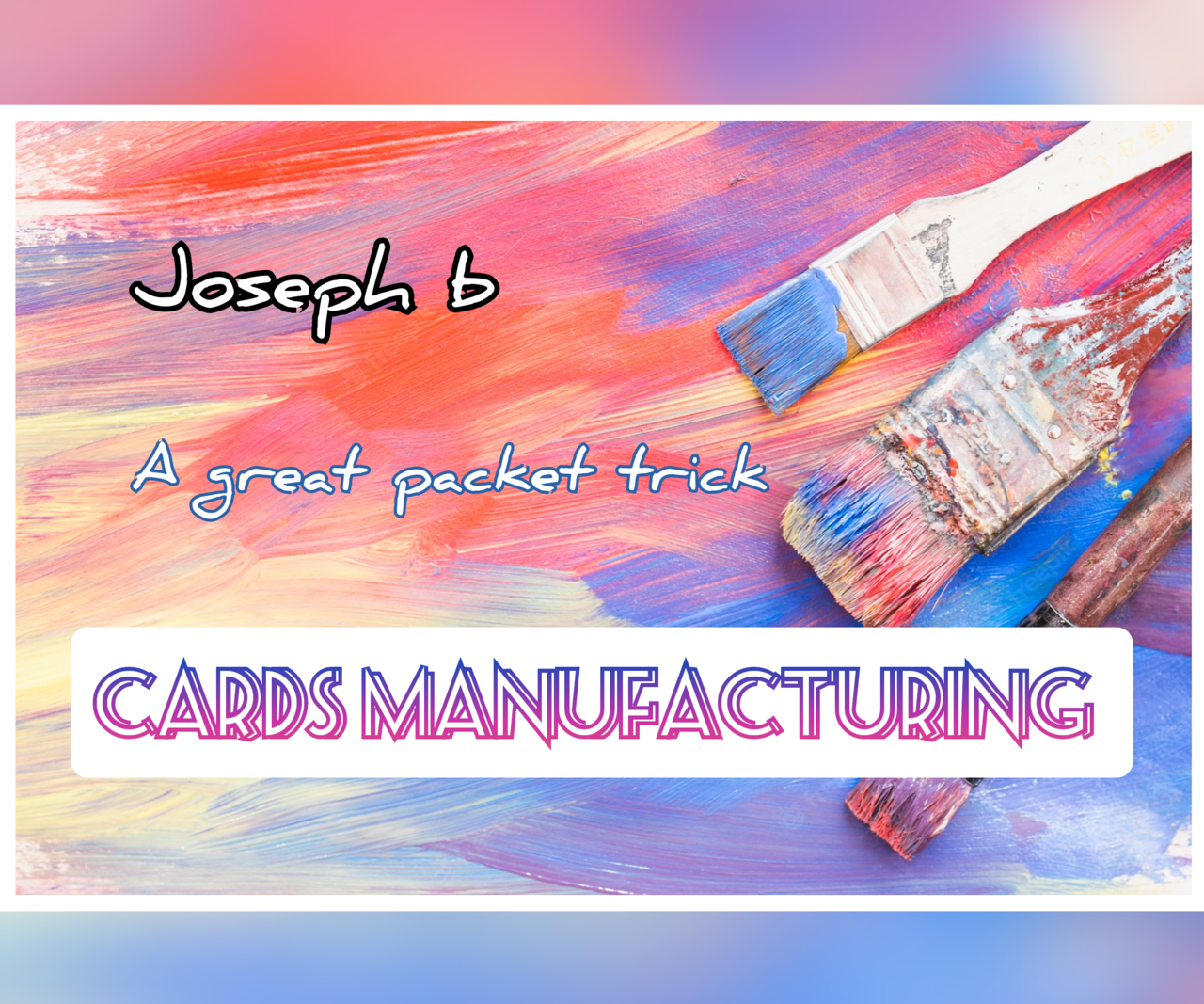 Cards manufacturing is a surprising effect.
A KILLER packet trick. Four blank cards change many times in the hands of the Magician and finally a great ending!
The only tecnique necessary is the Elmsley count, Joseph will teach you everything in detail.
It is a mind blowing effect.
If you are familiar with Packet Tricks, this is very simple to do and a very quick reset!
Look the full performance! 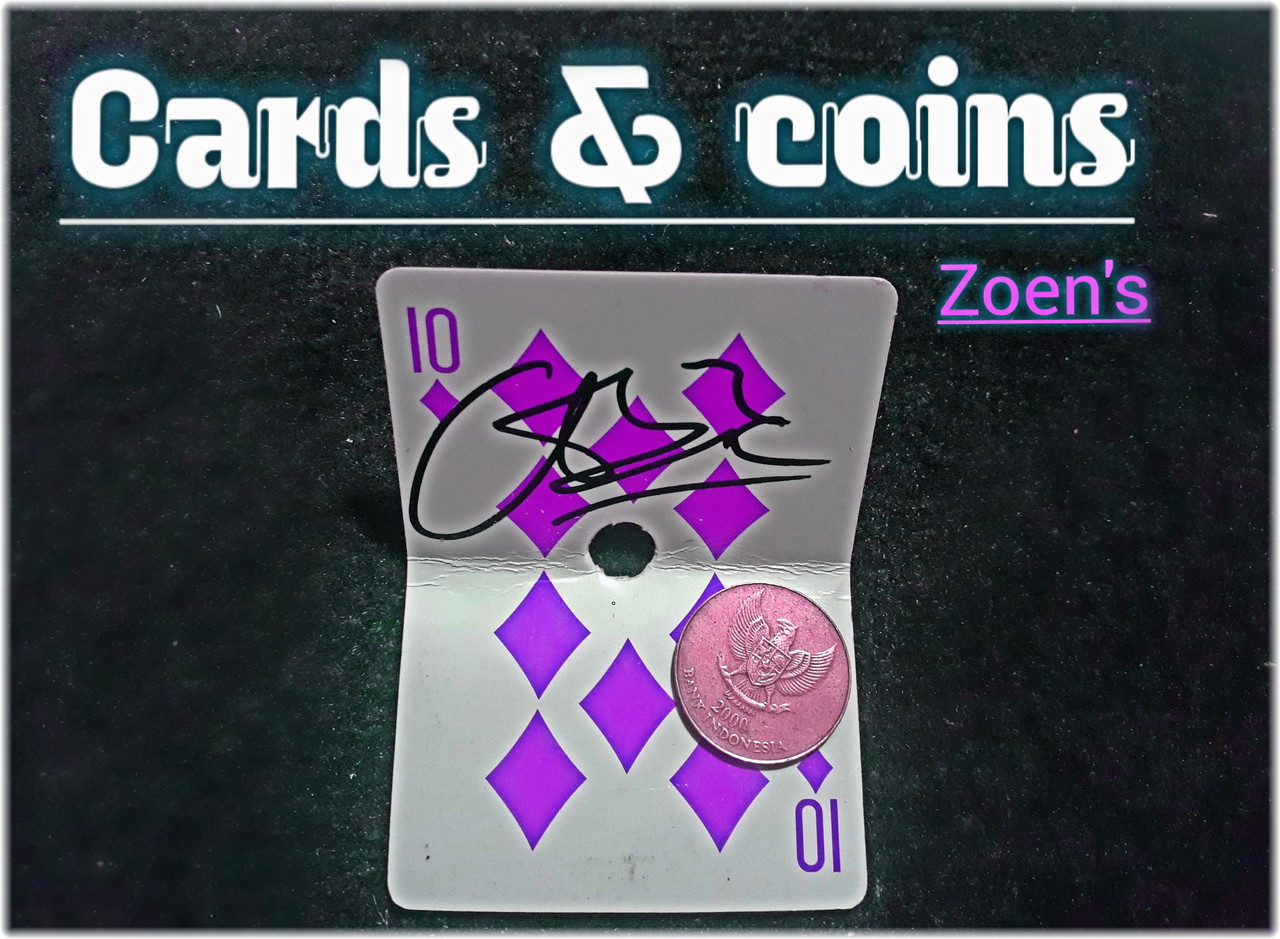 A solid thru solid effect using cards and coins

Impossibly make a coin fit through a small hole in a card!

And all of this is impromptu without gimmicks!
The method is unique and very easy
Everything is examinable before and after
What are you waiting for??
Learn now!! 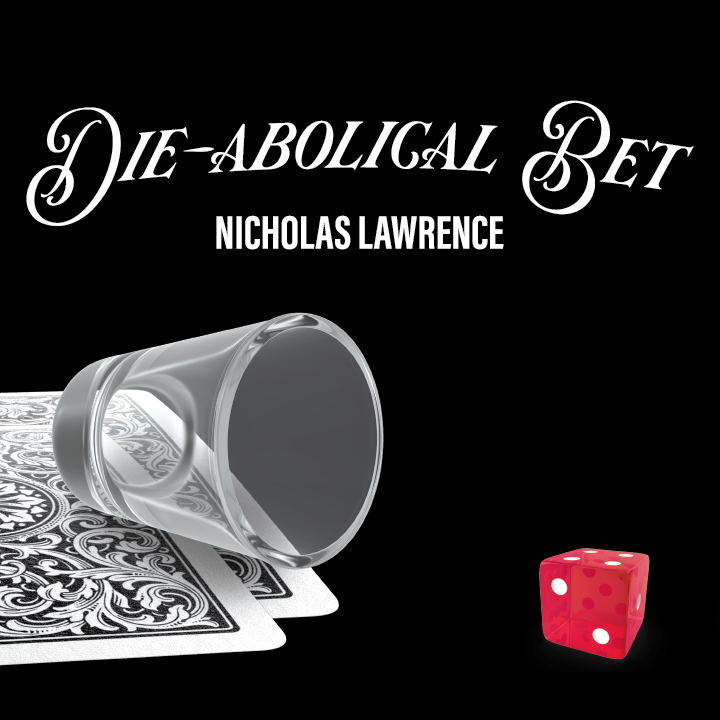 Perform an incredible solid through solid effect with an ordinary die and just a couple of playing cards. Direct from the mind of one of the modern masters of gimmicks comes a visual miracle that you have to see to believe. This is Die-Abolical Bet by Nicholas Lawrence.

Die-Abolical Bet comes with precision-made gimmicks that make this solid through solid effect possible. There are no flaps, trap doors, or sliding panels. The clever principles in play allow your audience to see the die clearly on the card while surrounded, and yet it still passes through the card. As a bonus, you’ll also learn a kicker ending where you apparently show a hole in the card the dice must have passed through, only to reveal that the hole has transformed into a black sticker and the card is completely solid. Along with the expertly taught tutorial from Nicholas Lawrence you will receive multiple gimmicks to perform this trick again and again. Perform one of the most stunning solid through solid effects with ordinary objects. This is Die-Abolical Bet by Nicholas Lawrence. 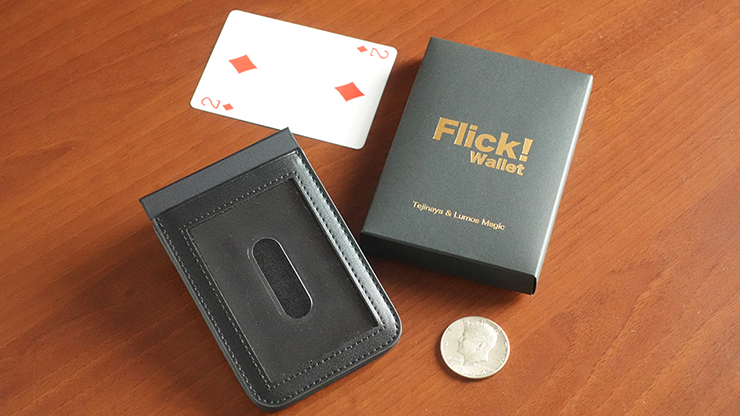 Insert a card or bill and flick it with your finger. That's all it takes to make them appear, change, disappear, or teleportation. How would you use it? 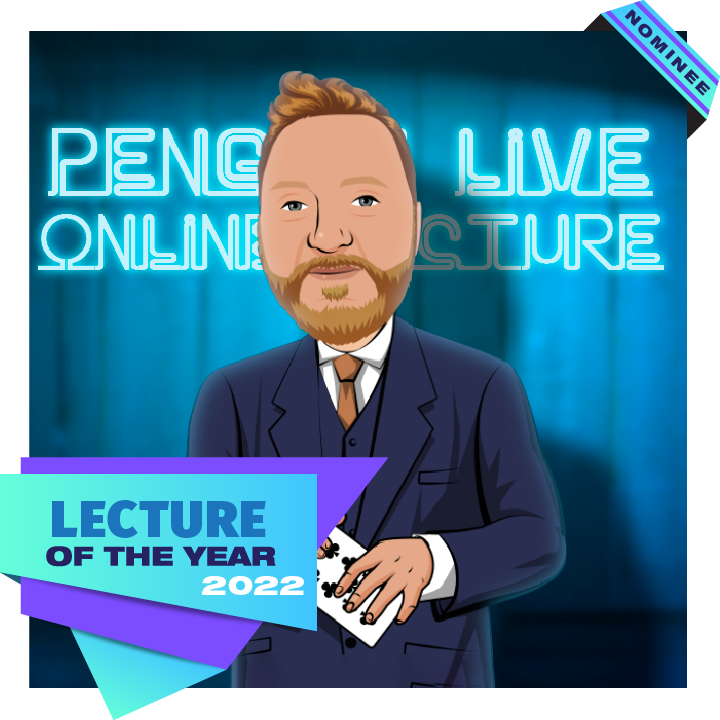 "The greatest compliment I can give about the material of Bill's is that I use it. Not only do I use it, I use quite a bit of it A LOT. I don't mean I use it toying around with my magical peers at meetings or conventions, but that I use it in paying circumstances during my formal shows and on the Las Vegas strip" -Paul Vigil

"Bill's objective is to entertain his audiences, use methods that work under fire and he takes the responsibility of making magic fun very seriously. Bill’s advice, is advice I think everyone should pay attention to." -Bill Malone

"Bill's theory on performing in a cocktail environment is worth ten times the price. I have been working cocktails for over 15 years and I still learned some very valuable information from Bill that I will apply directly to my craft." -Richard Sanders

"It has become increasingly clear that Bill thinks long and hard about staging, presentation and creating professional pieces that are memorable. Professional secrets worth ten times the asking price!" -Cody S. Fisher

Bill will be teaching a ton of 'every day carry' for impromptu and bar magic and also his go-to stand-up routines using the same props/effects and how they play onstage powerfully as well. "My philosophy is a disciplined approach to "less is more"; using similar props, routines and effects in any and all venues and any audience I'm performing for."

Ashes Feng Shui- The quickest way to elicit a strong primal response unlike any other effect. This reputation-maker is the simplest way to guarantee jaws will drop.

Ultra-Mental Mingling- A three phase killer using only an invisible deck. Multiple effects that build to a scream inducing conclusion.

The Name- The real work on the most versatile & bulletproof personal mind reading technique available.

Weird Ass Psychic Power- You have never seen a serial number divination like this. Ever. As deceptive as it is entertaining.

Princess & The Pea- Using an ancient fairy tale as the premise a spectator divines the exact card that was randomly and secretly selected by a spectator before the performance even began.

First Crush- A powerhouse of direct mind reading. All the subtleties and knowledge after decades of performances will bring you up to speed and closer to the appearance of real mind to mind communication. There does not seem to be any other explanation.

Recently Named Canadian Magician of The Year! Bill Abbott has performed over 5000 shows in 11 countries. Bill is also creator of original magic illusions. And you may have seen his tricks on America’s Got Talent, The Disney Channel, Netflix, NBC, FOX & The Steve Harvey Show. BAM (Bill Abbott Magic LLC) is an internationally recognized production company that equips, instructs, motivates and inspires thousands of professional performers around the globe. 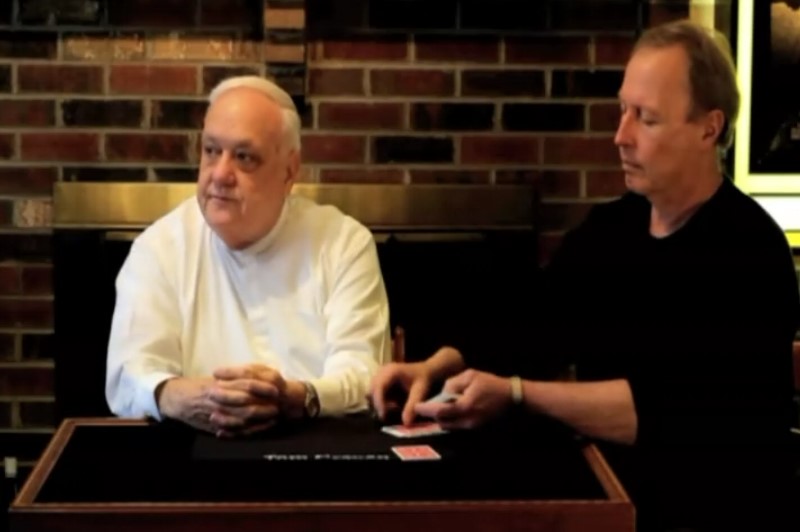 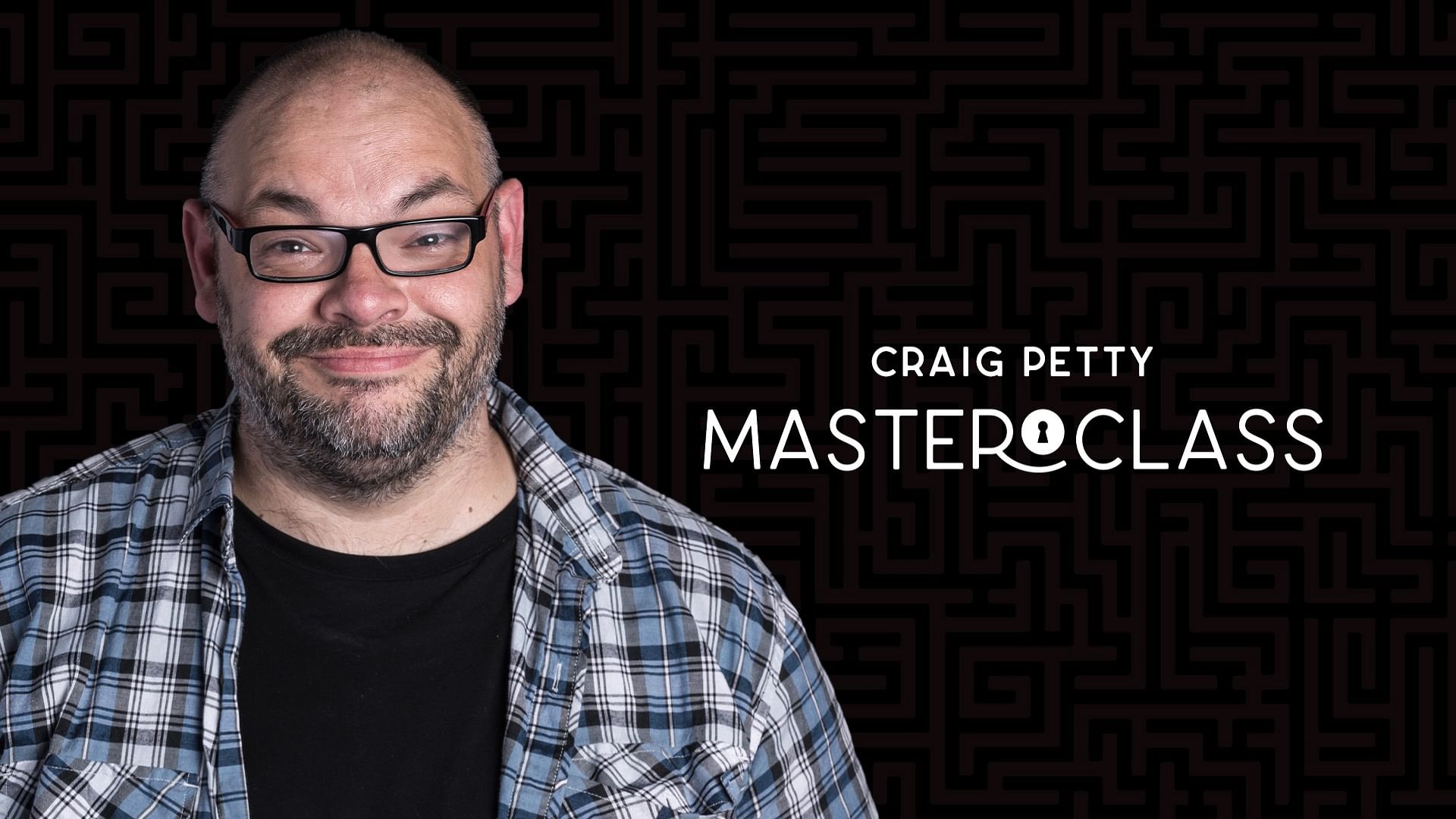 Cross
Two cards distinctly marked with crosses (“X”s) on the back vanish and then sandwich the selected playing card in the deck.

Celebrity
A chosen card has the name of a celebrity on the back that a spectator was thinking of.

Lockdown
You read the spectator’s mind and divine the film, color and card they chose.

Invisible Stickman
A stick figure vanishes from one playing card and magically reappears on a thought-of playing card.

Stick Pack
Stick figures start to appear on the backs of a packet of four Aces before all jumping on to one card. Then, the stick figures appear on every card in the deck.

Lotto
Two decks with numbers on the face are shuffled. Deck one is cut into six piles, and the numbers match six chosen cards

We’re thrilled to have Craig Petty help us close out the year in style with an amazing Vanishing Inc. Masterclass taking place throughout December.

Craig Petty is an award-winning performer and creator that has created some of the bestselling magic tricks of the last two decades. He is best known for his creativity and commitment to pushing the art of magic forward, as seen on his wildly popular “Craig Petty’s Magic TV” YouTube channel.

These three jam-packed lectures are a close-up magic worker’s dream. There’s something for everyone from card magic to coin magic and even a touch of mentalism. Everything will be wrapped up with a live zoom Q&A where you can ask Craig anything you’d like (this is always the most popular part of the Masterclass series).

Still on the fence about grabbing Craig Petty’s Masterclass? Here are three reasons you won’t want to miss it:

You can purchase the Craig Petty Masterclass separately or save big by subscribing to VI Monthly. This membership will give you the Masterclass, plus immediate access to a huge streaming tutorial library, and free or discounted shipping on every order, for less than the cost of the Masterclass alone.

Slow Motion Sandwich
A playing card slowly materializes from back to face.

Small Change
A pack of cards with different denominations on them are shuffled and the spectator is allowed to choose any five. You correctly predict the amount they selected.

Face Off
A partial transposition of a card where just the face travels, but not the back.

Twin Souls Variation
The spectator says stop and their selected card is turned faced up. With a snap of your fingers, the entire matching four of a kind is now face up.

Back Off
A mystery card is placed aside and you perform a small packet (three cards) ambitious card routine that ends with a mystery card kicker. 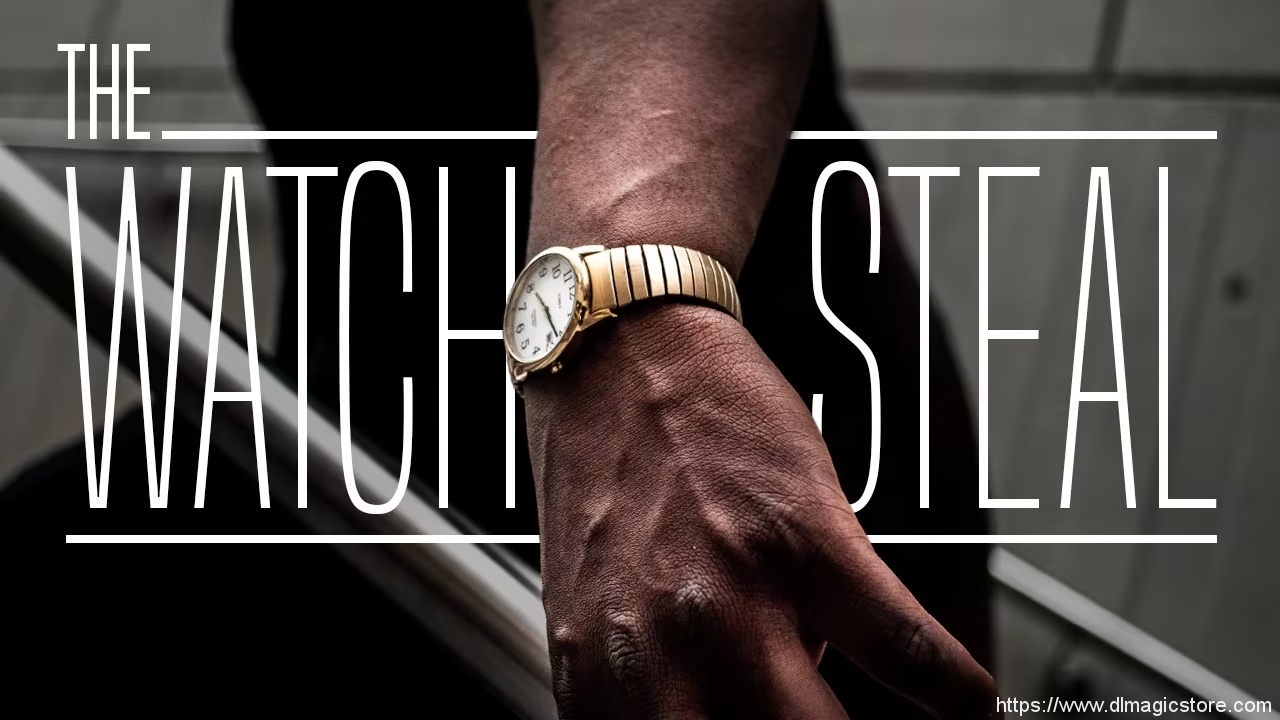 Learn to steal a watch (for entertainment purposes only)… You will have to give it back.

James Brown, master of misdirection and a professional pickpocket, will show you how to steal a watch straight from someone's wrist.

In this instant-access video tutorial, you will learn:

James will also teach you to steal all kinds of different watches:

This is the first in the "Only One" series by Ellusionist.

The idea with this series is that if you had the time or patience to learn only 1 trick in the category of pickpocketing – then it has to be this one. The Watch Steal.

This isn't a 3-week masterclass, a course or a compendium. It doesn't have 12 hours of teaching.

This video tutorial is direct. It gets straight to the point. One easily consumable video that covers the mechanics, nuances and misdirection required for you to steal a watch from a stranger.

Designed with the right theory to ensure you can feel comfortable performing this anytime, anywhere – and for anyone. 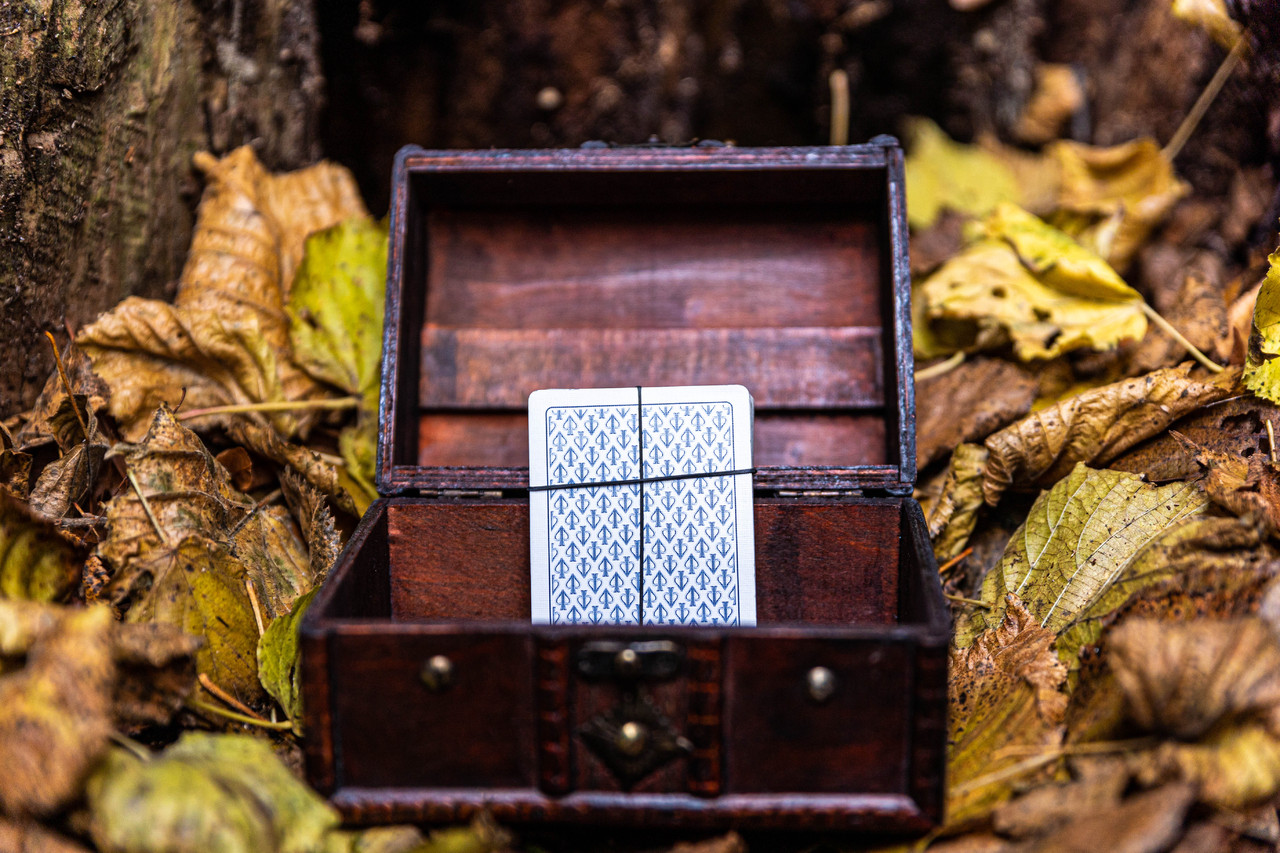 "Holy trap is so visual and unique. And the method is Fantastic and also the Cross shape makes this routine more impossible. Highly recommended!!!" - Jeki Yoo

“This is insanely visual, it literally looks like CGI!" - Luke Oseland

After 1 year of intense investigation, Dr. Cyril Thomas has finally found the Holy Grail of rubber band and card magic.
Just imagine… A spectator selects and signs a card. The card is lost in the middle of the deck and the deck is fully wrapped (vertically and horizontally) with a crossed rubber band. The deck is then hold on both of its corners with the extreme tip of your fingers. Suddenly, with no suspicious move, the crossed band disappears from around the deck and reappears in the middle of it, crossed around the chosen signed card. The visual of this effect looks like CGI and you will be able to enjoy its impact in real life!

The best part of it? There is no duplicate card, no duplicate rubber band and no gimmick. Only one regular rubber band, a regular deck of card and a regular unique signed card. The mechanic behind this gem is so genius that the method itself will fool you.

- Holy trap! During the 30 min tutorial, the Dr. will teach you all the subtilities behind this wonderful routine and several alternative handlings

- Quicky trap! He will also teach you another impromptu setup to make a crossed rubber band disappears in a blink of an eye from almost any rectangular object (mobile phone, deck of card, pack of cigarettes…).

- Bonus effect : finally, the good Dr. will teach you a bonus ending variation that worth the price of this project. In this effect, the crossed rubber band disappears from around the deck and reappears around the signed card in an impossible way (in a Z shape).

Don’t miss the best rubber band project from the tortured mind of Dr. Cyril Thomas, and acquire the holy grail of your repertoire!