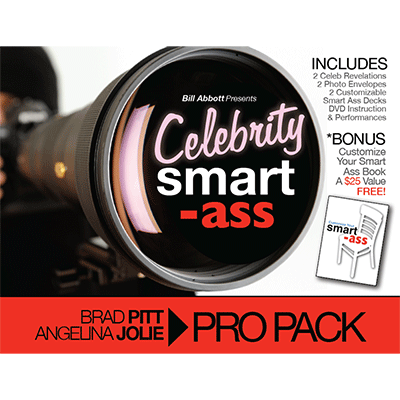 “I now know that Celebrity Smart Ass is the reason I created the Smart Ass concept in the first place. It’s a perfect marriage of bulletproof method and commercial presentation. AND it’s no longer a card trick anymore! Celebrity Smart Ass a permanent piece in my show…and now it can be for you too!”
– Bill Abbott

Routine:
The topic of celebrities and our endless fascination with them is introduced. You proceed to conduct a test of the audience’s celebrity knowledge by using cards with first names on them. Going through the dozens of cards you call out each celebrity first name and the audience calls out the celebrity’s last name. For example you say, “Paris!” the audience says, “Hilton!”, you say “Tiger!” they say, “Woods!”, you say “Britney”, they say, “Spears!” etc. To take the test to the next level you ask for the help of a celebrity expert from the audience. Someone with almost intuitive or psychic ability in their mastery of celebrity identification. A volunteer is invited on stage, shown a large envelope, is offered a chair and asked to sit down on the envelope. Now using the volunteer’s “celebrity intuition” with the help of their “psychic derriere” they will attempt to deduce the mystery celebrity whose photo resides in the envelope they are now sitting on. The spectator is handed the pack of celebrity names and is instructed to take about half in each hand. They are asked to toss one half away and keep the other. After they do this they cut the remaining names into two piles, holding one in each hand and they once again toss one pile away and keep the other. Down to the last few names, the participant chooses one, having the opportunity to change their mind as many times as they like. Their final choice is revealed and it’s “Tom” for Tom Cruise. The spectator stands and hands you the envelope. Unbelievably they have found the needle in the haystack, as you pull out a photo of Tom Cruise…at the age of six months! A photo of a cute baby is revealed and the volunteer goes back to their seat to some polite applause and a lot of laughter! You unfold the photo explaining that the you hope that no one is easily offended as Tom Cruise is naked in this photo, and the baby is in fact, in the buff, when the photo is opened! You then ask the audience if they think that Mr. Cruise looks cuter as a baby, then he does now as an adult? Suddenly you turn the large tabloid-size photo over to reveal a very large (grown up) head shot of…Tom Cruise!