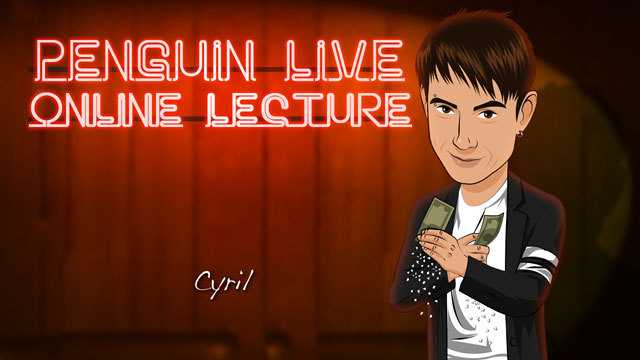 Coin in Can (Street Magic)- A borrowed quarter instantly penetrates into a sealed soda can chosen moments before. Cyril’s method looks incredibly clean and he shows you exactly how to make it.

Dry Cup routine (Party Magic)- One of the greatest party tricks ever. A do-as-I-do where you teach the spectator to make a cola vanish over their own head.

Healed and Sealed Can (Street Magic)- He brings the cola back using his own handling of a now-classic effect including all the details that make all the difference.

Money Manipulation (Stage Magic)- he finishes by showing us his award-winning money production. Cyril teaches the special fold and technique he uses to reliably produce one bill after another.

You’ll also learn what it really takes to create, design, and perform astounding and original magic

Cyril has appeared in over 16 prime-time television specials in Japan and two television series reaching audiences in over 26 countries. Considered one of the pioneers of street magic and known for his ability to be an effective storyteller, Cyril continues to create exciting new magic and discover new ways of surprising his fans while pushing the boundaries of magic on television and on the live stage.