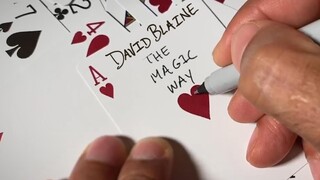 What time is David Blaine on tonight? The new David Blaine magic show airs tonight 10|9c on ABC. Yes, innovative endurance artist and magician David Blaine returns to ABC with his reality-defying magical acts for a one-hour special, “David Blaine: The Magic Way.”  It’s been more than 20 years since the first-ever David Blaine TV show, “Street Magic,” debuted on ABC. This particular David Blaine ABC special introduced him and his unique brand of magic. Since then, he’s amassed worldwide fame for his signature stunts that have astonished some of the most recognized celebrities, turning the camera on them as millions of viewers at home witness and share their visceral reactions. Throughout “David Blaine: The Magic Way,” Blaine’s famous friends make appearances and allow him to work his mysterious talents on them