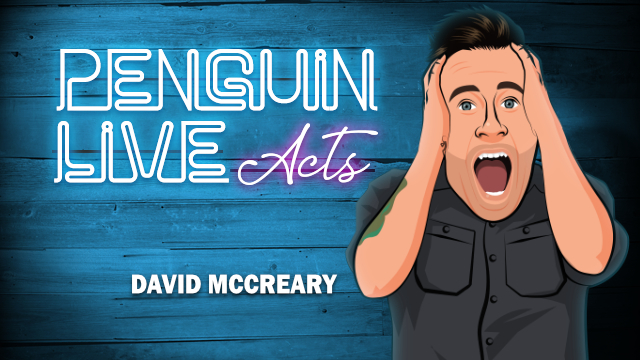 “David is all at once disarming and devious. He will have you laughing all the way to astonishment. Don’t let the goofy exterior fool you, let the magic do that.” – Aaron DeLong

“David McCreary does the kind of comedy magic I love. HIs touches on his stage act are gold for anyone who wants to take their show from good, past great, to incredible.” – Erik Tait

OPENER – This is David’s comedic prediction opener. It sets the tone for what the rest of the show is going to feel like. It includes 3 random predictions written out on a dry erase board. Two and a half of them aren’t great, but they are laugh out loud funny. The final half of the last prediction let’s the audience know, that not only am I going to make you laugh tonight, I’m also going to fool you with my prestig pressdije
presdigatation magic tricks.

SPONGE BALL MONTE – This is, by far, David’s favorite trick to perform for people. It’s his version of the shell game used with sponge balls. Inspired by a throw away gag that David Williamson did in his Sleight of Dave video, this bit engages not only the volunteer on stage, but drives the audience crazy. This is a trick that gets funnier for repeat audiences. You can repeat this trick over and over for the same audience and, as long as your volunteer hasn’t seen the trick, it gets more and more entertaining.

SHREDDER – David borrows the largest bill in the room and has a spectator place the bill into an envelope. That envelope is then mixed with four other identical envelopes. David then works with the poor sucker who just offered up his money to eliminate (shred) four of the envelopes, hoping that the money isn’t in an envelope that’s being shredded. It’s funny to see how much an audience enjoys seeing somebody else in fear of losing their hard earned cash.