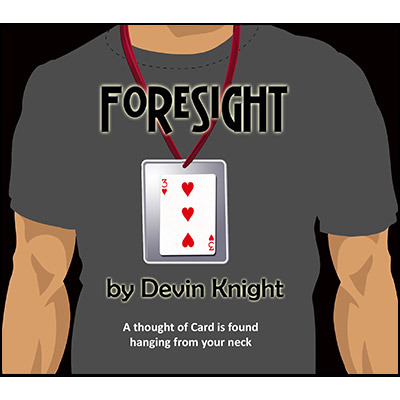 The magician holds up an envelope and says it contains a prediction. He asked a spectator to name any playing card. Performer says the named card is in the envelope. He removes an 8.5 x 11 inch picture that has the whole deck spread out. The performer says look, there is your card right there.

Now for the amazing part, the performer immediately tells the first participant the card he is thinking of. He simply makes two comments about the card, both are correct (you are never wrong)and then names the card. You do this without any complex fishing. In fact you name the thought of card so quickly it will startle even magicians! The magician then points out that he has been wearing a CLEAR cardholder around his neck from the very start. You can see the back of a playing card inside it.