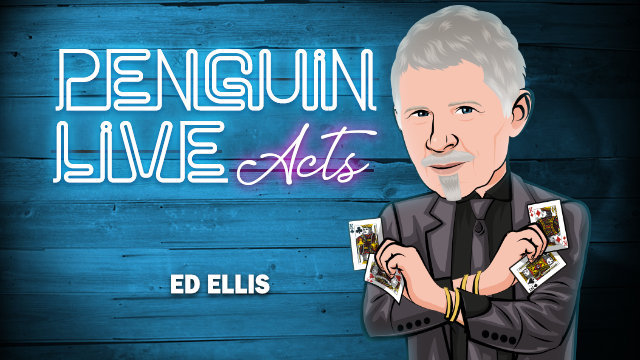 Back in Time- A clever routine where a signed card travels backward and forwards in time with the signature disappearing and reappearing. The finale of the routine has the back of the signed card changing color.

World’s Fastest Hands- A multiphase story routine about earning the title of the World’s Fastest hands with a four of a kind being clearly put into the center of the deck and then appearing at the top of the deck.

Ring and Rubberband Routine- Includes Crazy Man’s Handcuffs, Rubberband penetration in the spectator’s hands and a finger ring passing through a rubber band that has been twisted around it.

Houdini Card- An Ambitious Card routine with a motivating story and some flashy moves that will help you improve your own ambitious card routine. This engaging routine even includes the deck being manipulated while wrapped in a rubber band!

Illusion or Reality- Ed’s take on the Everywhere and Nowhere plot using a spectator’s signed card and some unusual sleights that are fun to learn.

Coin through Glass- A large coin begins by jumping from Ed’s hand into a box. Next, it impossibly penetrates the bottom of a glass in increasingly impossible ways.

When a Knot is not a Knot- A knot is tied on a rope, and visually plucked off the rope and given away to an audience member.

Gambling Routine- Production of a Royal Flush and the change of a losing hand of 21 into a blackjack.

Torn- A signed card is shown torn to pieces before it is vanished and restored in the center of the pack. To prove it the signed card visually jumps out of the pack with a quick flick of the wrist. This practical routine is also the perfect closer for any card set.

Plus you will learn a wide variety of new card sleights and stunts from Ed Ellis to take your magic to the next level.

Ed Ellis has been a full-time magician for 37 years, performed and lectured at the world-famous Magic Castle for 20 years, entertained the troops on Korean military bases, and was the star of the Ed Ellis Television Show. Ed is also a highly accomplished drummer and is the only person to play solo on Buddy Rich’s drums in concert. In this Act, he teaches high energy big impact tricks that are why his audiences call him The Man With The Fastest Hands.