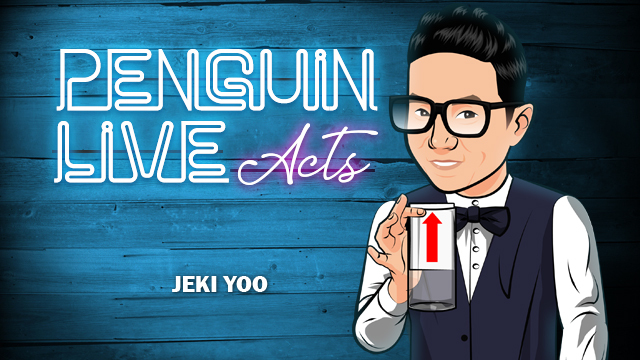 “Jeki Yoo has an entertaining energy and unique close up magic! I love his FISM act” -Shin Lim

4th Dimension- A red circle on a black piece of paper pops off and becomes a real ball, then back into the picture.

Rubberband Stop- The magician pulls a rubberband into a star shape and it is instantly hardened.  This makes an awesome souvenir for a spectator!

Ninja Ring-   A creative and entertaining Linking Rings routine that incorporates a finger ring and even a pair of eyeglasses.

Clap-Trap- Every time the magician claps, a card pops out of the deck. It even appears in the air.

Arrow coins-  Four coins appear impossibly from out of a playing card.

Coins thru Zipper Bag- The magician puts four coins into a transparent sandwich bag and he is able to remove them magically one by one through the plastic.

Diamond Matrix- The pips are removed from a signed card and transported to a corner of the table before they dissapear and are found back on the card. This is a beautiful routine and an excellent closer.

Jeki Yoo’s magic is innovative and original, inspiring magicians and rousing applause from audiences around the globe . After winning The Busan International Magic Festival, Asia’s greatest magic contest as a high school student in 2006, Jeki began taking the international contest scene by storm.  In 2009, he won the first place close-up magic award from the International Brotherhood of Magicians, the world’s largest organization of magicians. Since then, Jeki and his magic have wowed audiences in England, France, Sweden, Italy, Japan, China, and many other countries including Scotland where, as a member of SNAP, one of Korea’s biggest magic shows, he was invited to perform at the famed Edinburgh Festival. Jeki has also graced the stage of the incredibly popular hit show America’s Got Talent. Over13 million people watched him perform his own unique style of close-up magic before an impressed panel of celebrity judges. Even the infamous Simon Cowell was left stunned by what he had just witnessed.