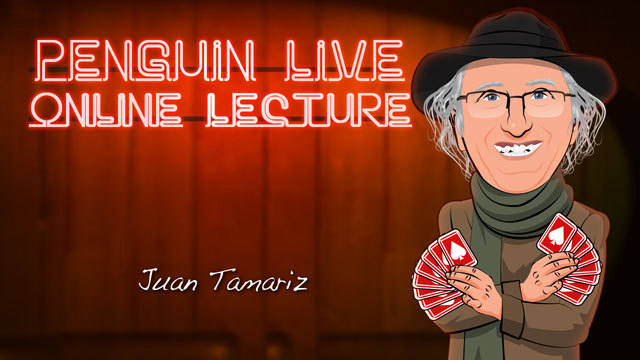 “Tamariz’s theory eliminates all possible solutions, leading the audience across the rainbow into WONDERLAND.” –Roberto Giobbi

“He’s fooled me worse, AND more times than any magician on the planet.” -Rick Lax

“Juan Tamariz is the Leonardo Da Vinci of our time.” -Christian Engblom

Juan Tamariz shows you how he makes card magic play big in his full, stand-up performance filmed at the prestigious Magic Circle in London.

Thought of Card- A single card is placed aside as a prediction. Someone from the audience names any card. When his prediction is shown, it proves to be correct!

Thought of Cards Across- Two thought-of cards invisibly travel from one packet to another using a clever new combination of methods that will fool you.

Two Thought Cards- A spectator helps choose someone in the audience to name any card, which his helper removes from his back pocket. This card then changes into another one she’s merely been thinking of while it’s held in her hand… but only for a moment as it returns to its original form.

Phone Trick- Juan figures out what card someone on the other end of a phone call is thinking.

A celebrity of television and stage in Spain and South America, JUAN TAMARIZ is known internationally among magicians as a true master of his art, and one who generously shares his time and knowledge, both in print and in person, with the magic community. He is the author of three critically acclaimed best-selling books in English: The Five Points of Magic, The Magic Way and Sonata. Along with Arturo de Ascanio, Tamariz has spearheaded a school of thought in close-up magic that has produced FISM award-winning champions and deeply influenced the craft of magic worldwide.