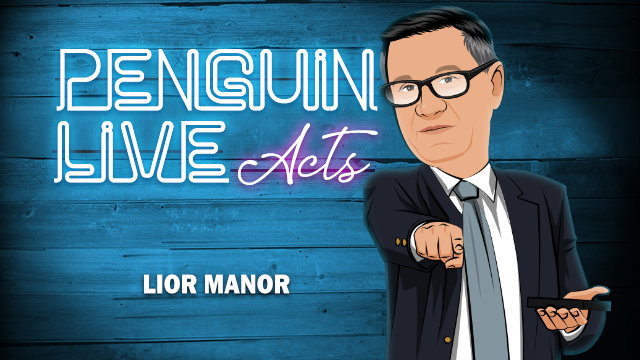 “Lior Manor may not be well known in the magic world, but that’s because he’s too busy flying around the world (always in First Class) doing shows for major corporations. He is known, however, to the elite of the magic and mentalism world. I have been to several of his lectures and, often, most of the attendees are other leading professionals. They come because they know Lior shares workable, money-making ideas that have been proven in the real world. He teaches the way he performs – with passion and with great humor. He’s not to be missed!””–Ken Weber

“A creative mind, a master mentalist, a wonderful humor. He is the genuine deal. He is loved and amazes internationally. Now you can find out why. International star power, a league of his own, and so funny.”” – Marc Salem

“Lior is and has been one of the driving forces in mentalism for over three decades. His is also a master trade show performer, MC and perhaps the best product promotion experts in magic. I have a prediction…his lecture will change your life!” – Bob Kohler

“Lior is a pioneer mentalist with tons of ideas in his back pocket. He always shares valuable materials that were proven to memorize the audience. I grew up watching his TV shows in Israel and it inspired me. This is a rare explanation video of a rare performer!” -Yigal Mesika

“Lior Manor is one of the busiest working mentalists I know and his magic and mentalism is designed to amaze and entertain people in the real world. You will enjoy his work!” -Asi Wind

In depth discussions on Theory, effects and routines;  Pre Show work, Invisible Touches, moving glasses how to get work in the corporate world and  flying in seat 1A.  And much more food for thought for the professional magician/mentalist.