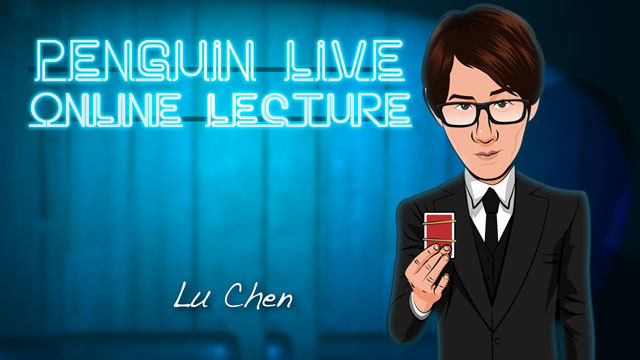 In this Penguin Live lecture, filmed at the prestigious Magic Circle in London, Lu Chen shares his thoughts and experiences from his incredibly successful career. Plus, he performs and teaches some remarkable routines that demonstrate his latest ideas and performance philosophies.

Tossed-out Deck- Lu Chen reveals the first four cards one-at-a-time by using a truly weird ability. Then he’s able to name all the rest of the thought-of cards, plus a PIN number, and a random animal from someone’s mind. After naming a few more cards without even using the deck, he shows that the last card thought-of has been predicted from the very start.

Number Prediction- which allows everyone to verify their numbers throughout the process and results in a fun, unexpected revelation of the total hidden in the first prediction. It’s surprising, clever, and happens really… fast.

Blind Folded- While he’s blindfolded and his back is turned, a randomly chosen card is placed anywhere in deck. Now, without looking at all, he locates the selected card. The same idea is repeated with someone else from the audience choosing, and losing, a card. Nobody else knows what it is. But this time, Lu Chen doesn’t even touch the cards. Instead, he instructs a spectator to perform a series of card moves ending with a single card in their hand. There’s no way it could be the selected card, yet, unbelievably, it is. And yes, he reveals how to do it… for the first time ever.

Lu Chen is an iconic figure in the world of magic whose TV shows have been seen by more than one billion viewers throughout Asia including Korea, Japan, and China.
2010 The Asia Magician of The Year – AMA &amp; FISM
2011 The Magician of The Year – The Academy of Magician Arts
2012 Grolla d’oro award – The Masters of Magic Festival
2012 The International Magic Award – David Berglas