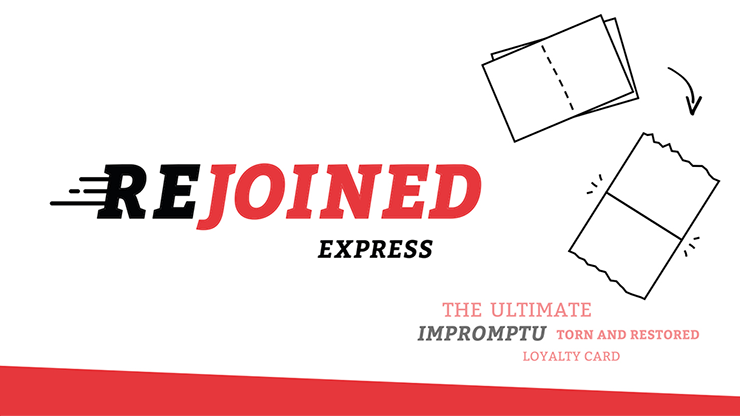 João Miranda and Julio Montoro released the original Rejoined back in 2016, and it was a best seller with over 5000 units sold worldwide.

Now introducing its “brother,” Rejoined Express, a visual and original restored effect like no other.

It is a much more organic and powerful effect than a classic torn and restored card effect because it seems totally impromptu!

In this effect, the magician reaches into his wallet and removes two outdated loyalty cards from two famous food stores. He says he will try an experiment with them because they are outdated.

The performer then signs one loyalty card and asks the spectator to sign the other.

Both cards are ripped in half.

Without any cover or special moves, the signed halves are restored BACKWARDS and PIVOTED against each other, making the restored loyalty cards a wonderful souvenir that the spectators will never forget.

Take a look at these points:

– Very powerful effect because it seems 100% impromptu
– Super easy to perform
– Leaves the audience with a long-lasting impression
– The gimmicks are always in your wallet READY to perform, anytime, anywhere
– The effect can be performed totally surrounded

Comes complete with all the gimmicks — enough for an outstanding 150 performances.