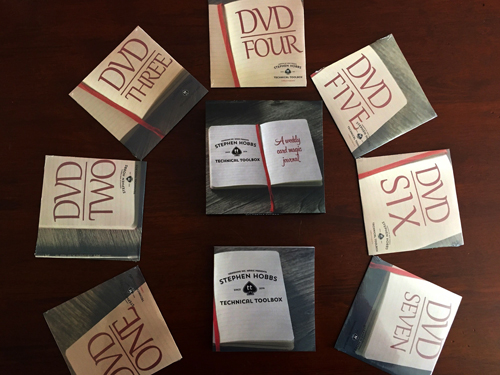 Beginning in January of 2014, Stephen Hobbs – author of Modus Operandi: The Magic of Jack Carpenter, Gene Maze and the Art of Bottom Dealing, and The Essential Sol Stone – commenced a project that was heralded to be both crazy and impossible: an online web ‘zine to be released every week for fifty-two weeks devoted to his brand of powerful and practical card magic.

Joshua Jay and Andi Gladwin of Vanishing Inc. were so impressed with the Technical Toolbox that they arranged to release the material as an elegantly-produced DVD set and book—with bonus material—in one package.

Stephen Hobbs’ Technical Toolbox collects all fifty-two weeks of the original web site, which included more than 170 videos (6 plus hours of material) describing over 55 routines and 85 sleights and techniques. All of Hobbs’ original introductions and meticulous credits are included in the accompanying softback book. In addition, separate manuscripts for certain effects are included as downloadable PDF attachments. The seven DVDs and softback book have been made into a beautifully produced box set.