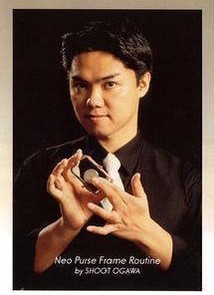 Shoot Ogawa began magic at the age of 10 and since has been featured on almost and every television channel in Japan and has performed his magic for talk shows， variety shows， and children’s shows. He has produced more than ten videos featuring his original magic.

Studying under Masahiro， Shoot has honed his close-up skills over the years and now he shares his experience with you with the Neo Purse Frame DVD.