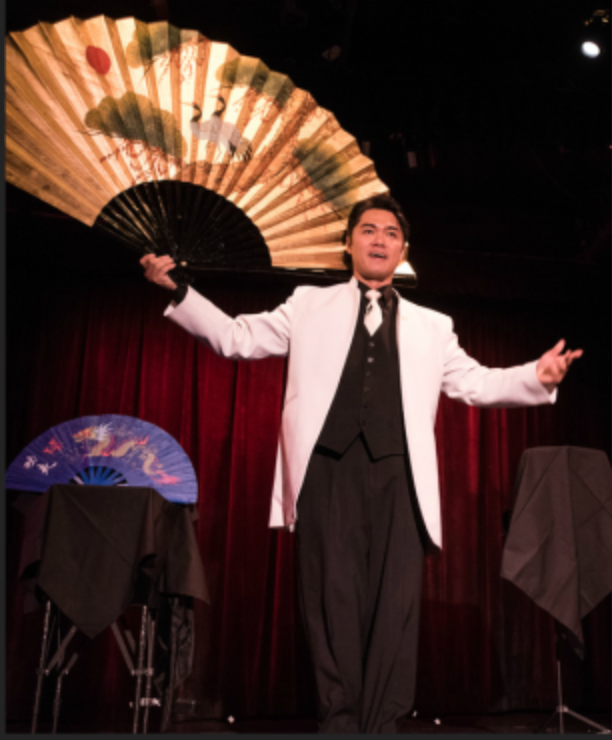 Technique: Shoot teaches how to spring a deck of cards from one hand to the next.  Very beautiful flourish.

Card Setting Technique: Shoot teaches the student how to take a random deck of cards and set them in new deck order.  In Japan, magicians have competitions on how fast one can return a shuffled deck back to new deck order. Can you beat Shoot’s record?

Knot Off Rope: The magician ties a knot onto a piece of rope and then slides that knot along the rope until it comes completely off at the end.  Visually strong effect.

Cut & Restored Rop: Shoot teaches a classic effect with rope.  The magician cuts two ropes in the middle with a pair of scissors and then continues to cut off small pieces from the ends of the ropes in a comical way in hopes of making all the ends equal in length.  The magician then ties the cut ends of the rope into a knot only for the spectator to watch that knot be cut into small pieces.  The knot is finally blown off the rope to reveal one long rope that has been completely restored.

Coin Matrix:  You’re in for a real treat.  Shoot Ogawa is known around the world for his coin matrix routines. You’ll not only learn how to perform this routine but you will also receive Shoot’s artistic insight on how to make this effect very magical for your audience.

Spellbound:  The magician takes a half-dollar into his palm and when he opens the palm back open it has turned into a Chinese coin.  This action is repeated several times when finally the magician changes the coins back and forth on the table mat in a very quick and visually exciting fashion.  This effect is Shoot’s personal routine for the Spellbound classic.  Imagine taking a half dollar and showing it very cleanly while saying, “this coin is made in”…and when you open your hands you say, “China” since the coin changed into a China coin.  Comical and pure eye candy.

Pro Tip:  Shoot teaches how using a wand is invaluable to the magician for misdirecting the eyes of your audience.

Spinning Wand:  Shoot gives a wonderful teaching on how to spin a wand with one hand for a very visual flourish.  He then teaches a well-known gag called clinging wand.

Silk from Wand Production: The magician shows both hands empty and yet when the magic wand is tapped on the back of the hand, a silk magically appears in mid-air.  The teaching on how to accomplish this effect is invaluable since the student can take that knowledge and apply it to their personal creative development of magic.

Technique Double Undercut: This is a must-know card technique for any magician.  This technique allows the magician to control a card placed into the middle of the deck back to the top of the pack.

Technique Tilt: This is a card effect that allows the magician to give the impression that a chosen card is placed in the middle of the deck when in fact, it’s placed second from the top.

Technique Key Card: When a student learns this technique then the whole world of thousands of card effects are opened to them.

Four Amazing Kings: WOW…Shoot took the above techniques which you just learned and created a visually stunning card routine.  Imagine having four spectators choose a card from the deck and then return their cards to the deck one at a time.  Then the magician attempts to find those cards by cutting the deck but to his shock and dismay, he locates 4 kings that are placed face down on the table.  The magician takes the last king and visually changes that king into a spectator’s card instantly and when the other kings are turned over they have visually changed into the other spectator’s chosen cards.  Not only is this a crazy card routine but it also allows you to practice a number of card techniques to grow your magic skills.

How to Routine a Magic Show: This is the payoff.  Shoot teaches the student how to take several effects from this project and routine them together for a well-grounded magic show to delight your spectator’s hearts.  LISTEN: This is worth the price of the entire project.  Having a fundamental understanding of how to string effects together in an effort to draw your audience into your act is key to giving a strong artistic performance.

These round table sessions are priceless because you’ll not only learn great effects and techniques but also Shoot’s thinking on magic theory along the way.

Top Shot: Shoot goes in-depth on how to perform this eye candy flourish.

3·6·9 : This is just Shoot showing off but he teaches a very unique card effect using a color change.

The Ogawa Club: This is Shoot’s version of a sandwich effect.

The Pass: Shoot teaches the classic pass and all of the nuances behind this technique.  If you learn this then your card magic will go to an entirely new level of impact.