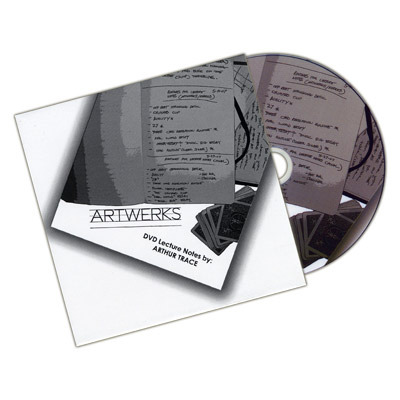 On this DVD you will learn the following routines:

27 – While the magician’s back is turned a spectator shuffles, selects a card, and cuts the card back into the middle of the deck. The magician then proceeds to face the spectator and asks the spectator to name a number. The spectator counts down in the deck to their number and discovers their card!

Duality – An audience member is asked to peek at a playing card. Another audience member who has not seen the first spectator’s selection is then asked to stop the magician’s finger as the magician passes it over the fan of cards. The card stopped at matches the first spectator’s selection. Arthur’s unique presentation strengthens the effect of this classic.

Sliver Certificate – The magician borrows a dollar bill and proceeds to levitate it. After the bill descends the magician unfolds the dollar and the spectator is shocked to find a silver ball bearing inside.

Mouth Travelers – Four aces travel one at a time from the magician’s hands to between his lips. This is a novel routine that is great for strolling-magic performances!

Spatial Exchange – A corner is torn off a playing card and the card is inserted into the deck. The magician then proceeds to instantaneously exchange the positions of the corner and the card.

The Crimped Cup – This is the classic Cups and Balls presented with a gambling premise and a magical twist. The magician “crimps” or marks the cup where the balls are supposed to travel to with a plastic ring. In the end, a ring appears on each cup to mark the appearance of each final load.