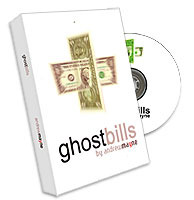 Phase One:
The magician borrows two bills from a spectator. The bills are folded, and one bill is placed inside of the other. The bills are then caused to visually pass through one another.

Phase Two:
One bill is placed on top of the other bill. The bill on the bottom jumps to the middle of the folded bill on top.

Phase Three:
The spectator holds on to the ends of a folded bill, with the other bill cradled inside. The magician pulls the bill through the spectator’s bill, just inches in front of their eyes.

One thought on “Ghost Bills by Andrew Mayne”