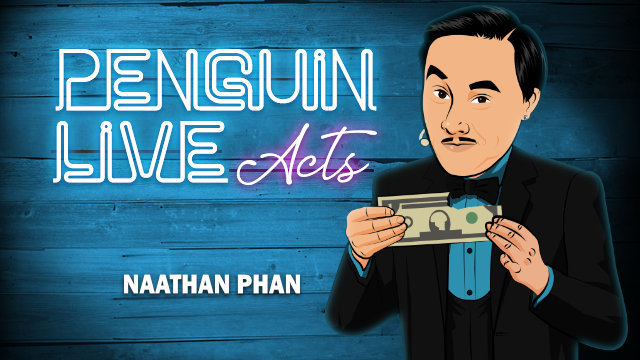 A 30 minute parlor act that is the perfect mix of visual magic and hard hitting mentalism.

Wine Bottle Production- This is total shocker. Quick, visual, funny, and for once, completely justified.

Bill to Wine Bottle- A dollar bill is vanished and reappears in the same wine bottle. This is an awesome call back to the first routine and an updated handling of a classic effect. Includes a brand new bill vanish appearing here for the first time.

Mental Epic- All you need is paper and different colored markers. The spectators choose the marker colors and you match the prediction with their chosen colors. This eliminates the use of unusual props and it’s a killer for anyone that knows the traditional method. This fool EVERYONE.

In addition to learning the effects you will also learn the real secrets on how to make a show for yourself as well as what it takes to make your audience fall in love with you.

Naathan Phan is a multi-talented, award-winning entertainer who has headlined stages across the globe, appeared in films such as Superbad, has been regularly featured on national television networks including NBC, Syfy, the CW, and Comedy Central since the age of 23, and is a regular performer at the exclusive, world-famous Magic Castle in Hollywood, CA!