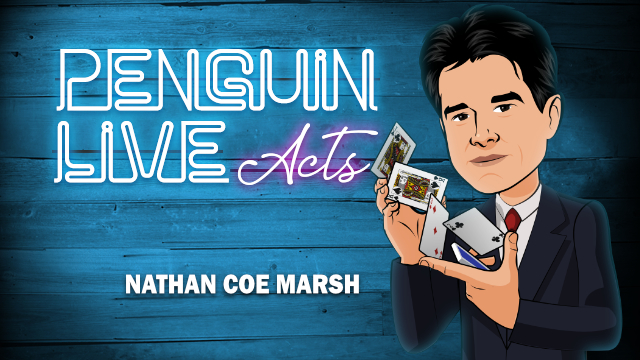 A Spirited Opener- The startling visible vanish of a silk followed immediately by the production of a full shotglass. This is a 1-2 punch that, in under 90 seconds, grabs the complete focus of an audience while also setting the atmosphere of fun for everything that follows.

The Chop Cup- Nathan’s stand-up chop cup routine that incorporates a Michael Kaminskas touch (with permission) in a new way to dramatically increase the impact of the final loads.

Bare-Handed- Any card called for is caught out of mid-air. The spectacle of a card sword without the cost, and Nathan’s new technique for controlling a named card from a memorized deck has many applications for both close-up and stand up (for non-memdeck users, this revelation is also powerful with a chosen card).

The Thumb Tie- Nathan’s presentation of Jay Marshall’s “Jaspernese Thumbtie” is an object lesson in how to milk the comic potential of your props and generate “playtime.”

Test Conditions Signed Bill in Orange- The result of 15 years of experimentation and hundreds of live shows. This is Nathan’s baby that came from the relentless pursuit of the most impossible version of the classic plot. The orange is in in full view, the signed bill is in full view. The bill vanishes. The orange is shown whole on every side. The signed bill truly is inside the orange. This brings down the house. Every. Single. Time.

Egg and Silk- A poignant presentation of Bev Bergeron’s classic handling of the Egg and Silk turns a “sucker trick” into a moment of emotional connection.